I moderate a celebrity birthday page on Facebook. As I posted them for June 7, I noticed that there is “royalty” among the singers. First, there is Prince, who was born today in 1958. Next we have a knight, as Sir Tom Jones is 78 today. Finally, we have the King… The King of Cool, Dean Martin, who was born today 101 years ago.

While some may argue that actor Steve McQueen was also nicknamed the King of Cool, Dean got there first. There was something about him and the way he carried himself that just exemplified “cool”. Many have attempted to be cool and THAT is their problem: they try and they attempt it, but they never achieve it. With Dean, there was no trying – he just WAS cool!

He was born in Steubenville, Ohio to Italian immigrants. He spoke only Italian until he was 5 years old. He dropped out of high school and held many odd jobs (including a boxer, gas station attendant, steel mill worker, and blackjack dealer). While working in clubs as a singer, his big break came when he teamed up with a young comedian named Jerry Lewis in 1946. They were an immediate success.

Martin and Lewis were the biggest act to hit the industry! They had their own hit radio series, the appeared as guests on many radio and TV shows, and made 16 hit films. Tensions rose between the two stars and after 10 years (10 years to the day of their first gig), the act broke up. There was talk that Jerry would be fine as a solo act, but Dean would suffer because all he could do was sing. This, of course, was not true.

While Dean continued to make hit records and he also continued to make films. His first solo film was basically a flop called Ten Thousand Bedrooms. This continued to fuel the rumors that Dean’s career as an actor was over. However, Dean landed a part in 1958’s The Young Lions with Marlon Brando and Montgomery Clift that wowed the critics! That same year, he starred with his buddy Frank Sinatra and Shirley MacClain in Some Came Running and he continued to prove the doubters wrong.

Dean made a few pictures with Frank and the Rat Pack, which you can read all about in a previous blog. The movies he made without the Rat Pack are worthy of watching, as well. His Westerns were some of my favorites. He was pals with the great John Wayne and starred with him in Rio Bravo (one of Dean’s BEST performances), and The Sons of Katie Elder. His other Westerns I like include Bandolero (with Jimmy Stewart), Five Card Stud (with Robert Mitchum), and Rough Night in Jericho (with George Peppard). 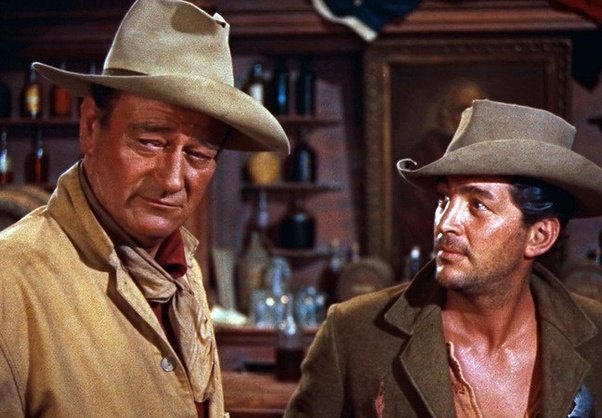 Some of the other films that he starred in were Ada (with Susan Hayward), Toys In the Attic (with Geraldine Page), Career, Who’s Got the Action (with Eddie Albert and Walter Matthau), and Bells Are Ringing (with Judy Holliday). Dean made fun of his image a bit in a film called Kiss Me Stupid (with Kim Novak), and then fell into a role that required him to just “be himself” – Matt Helm.

Author Donald Hamilton wrote 27 books about a government agent/spy named Matt Helm. The movies had success with James Bond, TV had success with Get Smart, so Matt Helm fit in as a combination of both. There were four movies based on the books (the fourth movie teased a fifth movie, but it was never made. The Matt Helm movies were The Silencers, Murderer’s Row, The Ambushers, and The Wrecking Crew. The movies are basically spoofs and are basically Dean goofing around. These movies are perfect for watching when you just want to see a flick you don’t have to think too much about while watching it.

Over the years, Dean began to build an image. The image was that he was a major drinker and always drunk. It was an image that he played to the hilt on stage and on television. When he would come out to do a concert, he’d often look around on stage, drink in his hand (apple juice), and say, “How long I been on?” He worked many jokes about drinking into the act. He’d often say, “I feel bad for people who don’t drink. When they you get up in the morning, that’s the best they’re gonna feel all day” and “You’re not drunk if you can lie on the floor without holding on.”

In the 1960’s, Dean was enjoying great success with his music career, his stage shows, his movie career, and more. When NBC approached him about hosting his own TV show every week, he just didn’t want to do it. He knew that committing to a weekly show would interfere with his normal routine – and his golf game! So when it came time to discuss the terms of the show, he made some utterly ridiculous demands! He asked for a simply outrageous salary, and said that he only wanted to work one day a week. He stated that he only wanted to be at the studio one day – the day the show taped. To his amazement, the studio agreed to his terms! Deana Martin, Dean’s daughter, recalled that when he got home from the meeting with TV executives he announced to his family, “They went for it, so now I have to do it.” 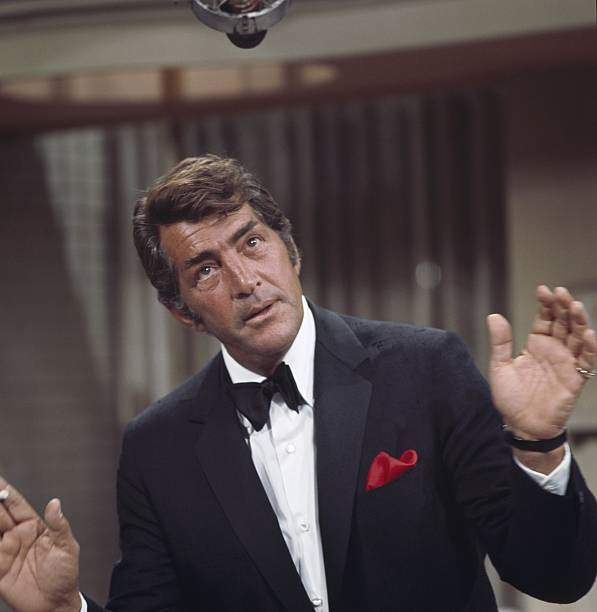 Because the studio agreed to Dean’s terms, it meant that he would not be rehearsing with any of the guest stars, learning any dance numbers, and all of his lines would have to be written out on cue cards. You would think that this would lead to disaster, however, it is actually what made the show a greater success and a whole lot of fun to watch! During dance numbers, other dancers would often push Dean where he needed to go, and Dean would stay loose and go wherever they sent him. He would often flub lines from the cue cards, which would cause him and/or the guests to crack up or ad-lib. The guests would often make fun of him and ad-lib lines about how they were the ones who worked all week at rehearsal. Dean would actually learn his songs for the week while in the car or on the golf course. The show ran for 264 episodes from 1965-1974.

Toward the end of the show’s run, the producers would gather a dais of celebrities and toast/roast someone famous. These were unlike the Friars Club Roasts which were often full of vulgar language and dirty jokes. The roast segment was such a success that when the Dean Martin Show was cancelled, the Dean Martin Celebrity Roasts became a show on it’s own. The majority of them were filmed in Las Vegas and roasted some of the biggest names in show business: Jackie Gleason, Lucille Ball, Jack Benny, Bob Hope, Don Rickles, Jimmy Stewart, and many more! 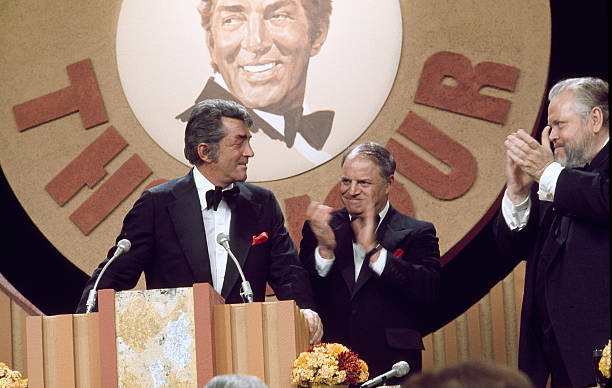 By the late 1970’s, Dean began to slow down and enjoy life. He had been recording 4 albums a year for Reprise Records, touring, and making movies. He released his last album for Reprise in 1978. In the early 80’s, he was reunited with producer Jimmy Bowen and recorded one last album entitled The Nashville Sessions. The album included the song that would become Dean’s first music video, “Since I Met You Baby”, which was produced by his youngest son, Ricci, and aired on MTV. His last film appearances were with Burt Reynolds and Sammy Davis Jr. in Cannonball Run in 1981 and the sequel in 1984. 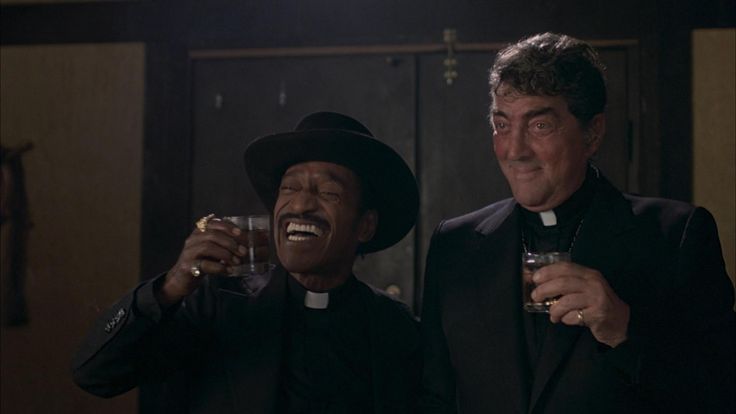 In 1988, his son Dino was flying with the California Air National Guard, when his jet crashed and he was killed. This was a devastating loss to Dean, and it left him very depressed. Frank Sinatra set up a reunion tour with Sammy Davis Jr., hoping that having the three of them back on stage would cheer Dean up – it didn’t. Dean was more comfortable playing in smaller setting, and these arena shows were just too big for him. He left the tour shortly after it started and was replaced by Liza Minnelli.

He had always been a heavy smoker, and in 1993 he was diagnosed with lung cancer. He was told that there were surgical options to prolong his life, but he decided against them. Dean Martin passed away on Christmas Day in 1995.

Dean Martin was truly a talent. He was a singer, an actor, a comedian, and entertainer. He made everything he did seem effortless. He made everything look easy. He took everything in stride and always looked like he was enjoying himself. He was always – COOL. When asked in an interview about how he wanted to be remembered, he replied:

“I want to be remembered as a damn good entertainer, nothing spectacular. A good entertainer who made people enjoy themselves and made them laugh a little. I want them to think, ‘He was a nice guy. He did pretty good and we loved him.'”

I think it is safe to say that Dean is remembered exactly that way.