As I was walking to my car to leave for work today, an ice cream truck was driving down my street.  I found it odd that it was not playing music.  Usually, you can hear the sounds of “Little Brown Jug”, “Turkey in the Straw”, “Pop! Goes the Weasel”, or “The Entertainer” (among others) when the ice cream man was driving around.  That wasn’t always the case, though.

My first memories of the Ice Cream Man are from when we lived in Sterling Heights in the early 1970’s.  The Good Humor Man always drove his white truck (like the one pictured above and below) and there was no music.  There was a set of bells attached to a string that the driver pulled to ring them.  I remember hearing the bells from the next street over and running over to my mom and dad to get a dollar of change to buy ice cream.

If you look carefully above the windshield in the picture above, you can see the bells the driver would ring.  Here are the bells detached from the truck:

I’m sure that the loud music is a better at getting the kids attention today, but we always listened for those bells!

I remember many summer days running up to my dad (who was usually mowing the grass, or working outside) and he’d walk to the curb with us to stop the ice cream truck.  There were SO many treats to choose from!  When I was a kid, I guess I wasn’t so OCD.  I used to try different ice creams all the time.  Today, I have favorites and stick with those.  Some of the treats I remember most:

The Ice Cream Sandwich.  I still love them.  The chocolate still sticks to my fingers while I eat them.  The good ice cream trucks took this amazing treat a step further – 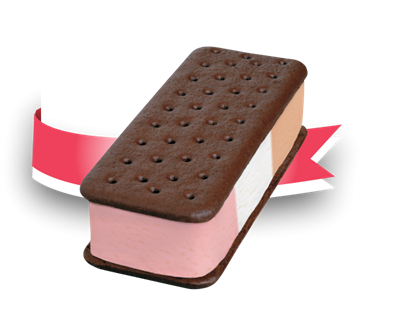 Push Ups.  I remember them being orange mostly.  Some trucks had the Flintstone theme, some had polka dots on them.  I remember we used to save the plastic stems and piece that pushed the ice cream up and used them for something with our Star Wars figures.

The Chocolate Éclair was always a favorite of mine.  I also like the variation where there was a chocolate candy center.  No crunchies on that one, but it had a hard chocolate coating over vanilla ice cream.

As much as I love chocolate, I preferred the Strawberry Shortcake version!  You can buy these in the stores today, but the ones from the ice cream truck always seemed to taste better.

The Bomb Pop!  This seemed to be the favorite of many kids in the neighborhood.  All of us kids had red and blue lips after eating this thing.  I’m not sure why, but this one always seemed to melt faster than anything else I got from the ice cream man.

Who didn’t love a Snow Cone!?  It was another favorite!  It also left whatever color it was all over your face.  Really, it’s a pretty lame treat.  It’s just a little flavor over ice.  The flavor ended up at the bottom of the wrapper as it melted.  That was kind of the bonus, you got to drink a shot of all three flavors after all the ice was gone. 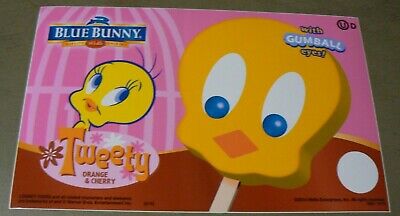 Tweety Bird Ice Creams were the ones I remember most.  They came in other characters, too.  I think there was Bugs Bunny, The Pink Panther, and Spider Man.  Today, I know the most popular of this creation is SpongeBob.  They all had gumball eyes and after you unwrapped it, it rarely looked like the character it was supposed to be!

The “cup” of ice cream was always available.  It may be vanilla or vanilla with chocolate.  Some had a real thin layer of chocolate syrup on it.  Sometimes it came in a plastic cup, sometimes I was in a paper one.  Either way, it almost always came with that little wooden scooper/spoon.

The Screwball was a favorite of mine for some time.  It was a flavored ice (kind of like Italian Ice) with a gumball at the bottom of the cone/cup.  Sometimes they were called Tornadoes or Twisters, but I remember them as Screwballs.  They also had one with two gumballs at the bottom.

If I had to pick a favorite, it would probably be the Drumstick.  I guess that’s why I still buy them at the store occasionally.  I always loved how it had that one bit of frozen chocolate at the bottom of the cone.  Bonus chocolate is always a good thing!!

As I grew older, the bells from the Good Humor trucks made way for the repetitive songs from warped records.  As older children, we still chased down the trucks, but because of the loud music, we had to yell “STOP!” in order for them to slow down.  The larger sides of the truck allowed for more room for the “Poster Price List”.  We still looked in awe at the many treats and made the difficult decision of choosing just one to cool us off on a hoy summer day.

I have fond memories of getting ice cream with my dad and mom.  I also have great memories of buying them for my sons.  I wish, however, the sounds of those Good Humor bells were still ringing in neighborhoods today.  If they were, I guess I’d be one of the first “kids” to run out and yell, “Stop!”