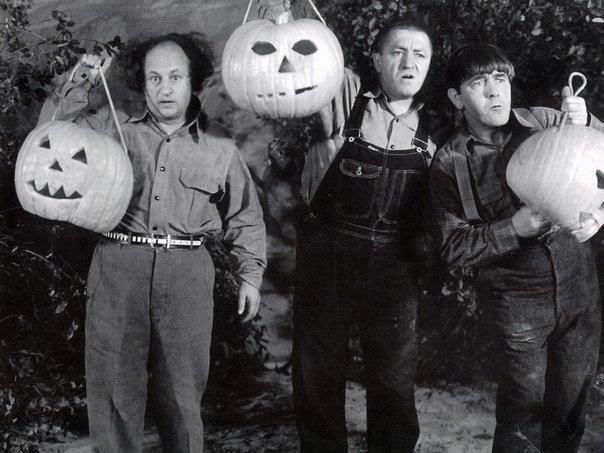 While I don’t always plan ahead what I am going to blog about until a day or so before, today’s Halloween Blog was something I planned on writing about a few months ago.  I was reminded of the topic after listening to one of the shows I did with my partner, Rob, on Honey Radio.

Somewhere down the line, I plan on writing an entire blog about “drops”.  In the radio biz, a “drop” is a snippet from a movie, a TV show, or some other form of audio that is used in pieces of production, or on it’s own.  So how do you use a “drop”? Above, you see a picture of The Three Stooges.  In their short “Micro-Phonies”, the boys end up in a recording studio.  Moe stands at the microphone while Larry and Curly make noise.  Moe yells, “Quiet, numbskulls! I’m broadcasting!”  I used this drop all the time.  I would use it with stuff our voice guy sent us.  The piece would be produced and it would play between songs.  The entire piece would start with some sound effect, then the voice guy saying “You’re listening to Keith Allen! (Insert drop – “Quiet, numbskulls!  I’m broadcasting”!) Then the voice guy would tag it by saying the station – “on Flint’s Classic Rock Authority – 103.9 The Fox!” (or whatever station I was at).

My buddy Johnny Molson, who I worked with at my first radio job had a bunch of funny drops.  Some were from movies, while others were from listener phone calls.  He had one he’d play that always made me laugh (some guy yelling “Listen kid, why don’t you just beat it!”)

Rob and I spent hours watching TV and movies looking for little lines that could be taken out of context to play on the show.  He had plenty of drops from the Steve Reeves Hercules movies, Star Trek the original series, Spencer for Hire, Batman, Dragnet, and so many more!  When we were live on the air, I used to purposely throw drops in when Rob was talking as one of the characters just to make him laugh.  He was so good, he rarely did.  As a matter of fact, he would often just react to the drop.    There were, however, a few drops that would crack him (and me) up.  They came from a record album that he had growing up.  Which, incidentally, is the topic of this blog.

When I think about monsters, I think of the Universal Studio Monster movies from the 30’s!  Bela Lugosi will always be Dracula to me!

…and in 1931, Boris Karloff was the Frankenstein monster!

In 1963, screenwriter Cherney Berg (who is the son of actress, screenwriter, and producer Gertrude Berg), wrote the script for the album Famous Monsters Speak.  Side 1 focused on a story that featured the voice of the Frankenstein monster.  The story is set at some scientist convention and they are playing the tapes of the Frankenstein monster.  Side 2 focuses on a story of Dracula, when someone stumbles on his crypt.  The voice work for the entire album is done by Gabriel Dell. 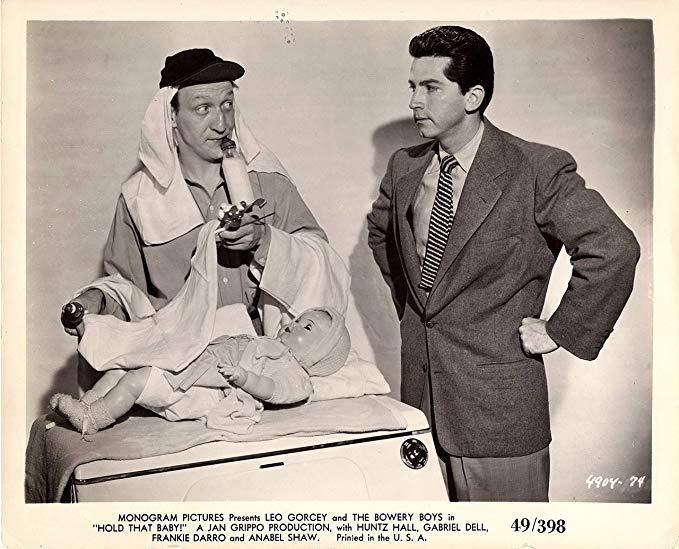 Gabriel Dell (on the right in the photo above) was an actor who starred in movies with the Dead End Kids, the East Side Kids, and the Bowery Boys.  I have often said that a good actor is one who can act by just using their voice (which is why I really love listening to old radio shows).  The entire album is voiced by Dell.  As the Frankenstein monster he is terrifying, while as Dracula he is equally creepy!  Keep in mind this was an album that would be found in the children’s section of the record store!  Rob told me his dad had bought it for him as a gift for a birthday or Christmas or something! 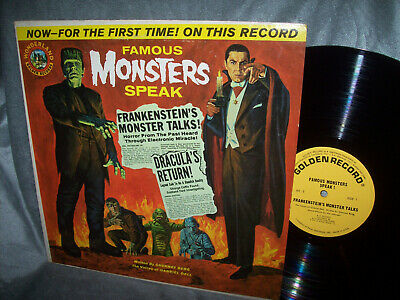 When Rob and I worked together, he had a few drops from this album.  As a morning show, we often looked for drops that talked about waking up, drinking coffee, etc…  On this album, Dracula simply said, “I command you – Awaken!”  We often used that.  He also says, “Stupidity has always been my best protection”, which we used when saying that one of the characters on the show was stupid.  Then there was this clip of Dracula gaining the trust of an unsuspecting victim by asking for directions.  In context, it is not funny, but out of context … (In a Transylvanian accent) “I beg your pardon, but I am a stranger to your city and have lost my way.  Can you tell me pleas – the bus to Kensington Gardens?” (This was one that I would throw in on occasion and would make him laugh – just because it was so bizarre).  On the Frankenstein side of the record, there is a 4 or 5 second clip of the monster making a growling/howling/yelling noise.  We used to promote that Richard D. was coming in after us, and we’d say the sound was Richard “warming up in the next studio”.

Those short clips/drops were all I knew of this album, until long after we were off the air.  I knew where they came from.  I had just those audio clips and would laugh when I heard them.  Then one day I was out at some used record store.  I found the album!  I called Rob and told him that I had found it and was going to listen to it.  He laughed like hell.  “I can’t believe you are so excited to find that damn record!  I guess that’s why I love you, kid!”  I can still hear him saying that to me.

When I listened to the album, instead of laughing (ok, I did when the monster made the “Richard D” noise), I was genuinely freaked out.  I couldn’t believe that this was a kids record!  It was done in the same vein as so many of those “Headless Horseman” and “Superman” records that had stories and a book.  There was no book with this album, and really, you didn’t need one!  Dell’s performance on the album is brilliant.  A guy named Hal Johnson is listed as the sound effects man and those effects are awesome!  The album is just as good as an old episode of Suspense, The Mysterious Traveler, Lights Out, or The Whistler.  Gabriel Dell’s performance makes me tired just listening to it – he really get’s into it!

So, here for your Halloween listening enjoyment – turn down the lights – and listen to Famous Monsters Speak.

Side 1 – The Voice of the Monster

You can read a bit more about this album here: