Today, May 16th is National Classic Movie Day.  This blog is part of a blogathon being hosted by my friends at the Classic Film and TV Cafe’.  This is the first time I have participated in it, but it is something they have done for the past few years.  According to other bloggers, it started with the “You are stuck on a deserted island” premise.  “What are the ‘must have’ movies you have to have?”  Over the years, the theme of the blog has changed yearly.  This year, bloggers were asked to pick their five favorite films of the 1950’s.  You can find links to all of the blogs that are a part of this blogathon by going to their website at: http://www.classicfilmtvcafe.com

Lauren Bacall once said, “It’s not an old movie if you haven’t seen it.”  There is SO much truth to this quote.  I don’t remember where I first stumbled on it, but it was a quote that stuck with me. The reason I start this blog with this quote is to prompt you to expand your thinking and attitude a bit.

The movies I am going to write about are what some would consider “old.”  This does note mean that they lack in a good story or a good performance.  As a matter of fact, as I look over my list of movies, I feel that they all have a good story and some powerful performances.  What makes them even better, in my opinion, is that they lack the CGI special effects and modern day movie magic!  They are good films without all that.

Trying to trim my original list down to 5 movies was a difficult task.  I started with a list of about 50 films.  I whittled that down to a list of about 17.  Certainly, any of these could be in my top 5 and are well worth a watch if you have never seen them:

The star power in the movies listed above is amazing!  Now, here are the 5 I have chosen to write about for National Classic Movie Day (in chronological order):

The film opens with these words on the screen:  “This is a shocking story.  It could never take place in most American towns – but it did in this one.  It is a public challenge not to let it happen again.”  Well, right from the start you are hooked.  The film is based on Frank Rooney’s short story “The Cyclists’ Raid”, which was inspired by media coverage of a motorcycle rally that got out of hand in July of 1947.

The film stars Marlon Brando as Johnny, the leader of The Black Rebels Motorcycle Club.  Word is Brando only took the role because of producer Stanley Kramer.  It’s an odd role for him, at least for me because I am use to him delivering these great monologues in other films.  He rarely speaks in this film, but it is still a powerful performance.

Even though he is only in the film for about 10 minutes, Lee Marvin’s performance as Chino, the leader of the Beetles, is very memorable.  Other members of the cast include Mary Murphy as Brando’s love interest and Robert Keith and Jay C. Flippen as law officers.

While the “shock” value today is a whole lot less than it was when this film is released, there are still moments that will stick with you!  Perhaps this is a bit stereotypical in the portrayal of rebellious teens, if you can get past the 50’s jive lingo, it’s worth a watch.

This film is the only film directed by Charles Laughton.  It is also one of those films that scared the hell out of me.  Robert Mitchum is simply amazing as Reverend Powell.  Powell is a serial killer who has the words “L-O-V-E” and “H-A-T-E” tattooed on his hands, and often uses them for spur of the moment sermons.  While in jail, Powell’s cell mate speaks of the money he has hidden from a bank robbery he committed.  Powell only learns that the man’s children are aware of where the money is hidden.  After the man is executed for his crimes, Powell finds the man’s children and widow and marries her in hopes of finding the money.

The cast also includes a young Peter Graves, James Gleason, Lillian Gish, and Shelley Winters.  This movie still freaks me out when I see the “under water” scene!  Mitchum is the perfect villain and this movie will stay with you long after you watch it! 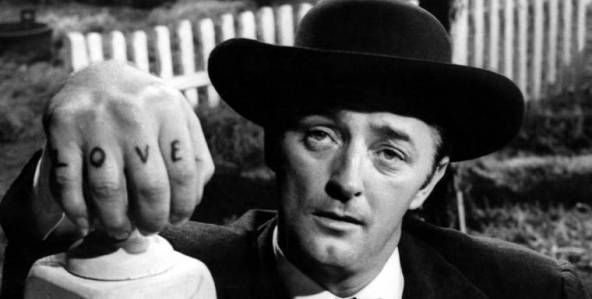 This is one of those films that not many people know about, and that is a shame!  The screen play is written by Rod Serling (Yes, Rod Serling of the Twilight Zone!) and it is a marvelous and suspenseful drama.  It was originally broadcast live on the Kraft Television Theatre in 1955 with Richard Kiley in the starring role of Fred Staples.  In the film, Van Heflin takes over the role.

Most of the movie takes place at the offices of Ramsey & Co – an industrial corporation headed by Walter Ramsey, played brilliantly by Everett Sloan.  You think you hate your boss?  Wait until you see Sloan in action.  He is the ultimate JERK! 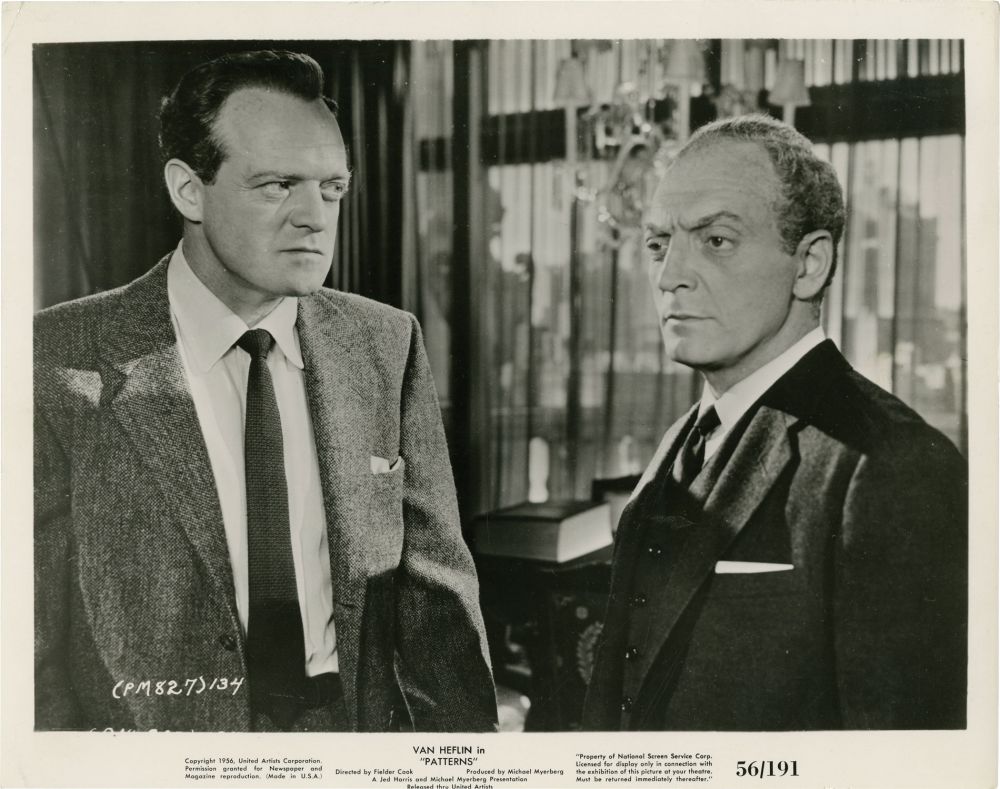 Ed Begley Sr. plays the role of Bill Briggs.  Briggs and Ramsey are always at odds with each other.  Briggs and Staples hit it off and become good friends.  In a story that could happen at any company anywhere, Staples finds out that he has been brought in to replace Briggs.

The movie is a true representation of corporate America.  We see the every day stress and the effects of it on the employees of the company and their family members throughout the film.  Serling was very careful to make the dialogue of the film as “normal” as possible.  One source stated that he re-wrote the screen play often to be sure the dialogue was honest.

The end of the film features a very tense confrontation between Staples and Ramsey.  The performances of Heflin and Sloan are Oscar worthy, in my opinion.  It may not be loaded with a whole lot of action, but it truly is an amazing film.

Hands down, this is one of my favorite films of all time.  It is a film that is often showed as part of management training or employee orientations because it shows a group of men with different morals and personalities working toward a solution (in this case – a verdict).

I have never been picked for jury duty.  I cannot imagine the weight or stress that is put on 12 people to decide whether someone is guilty or innocent of a crime.  I can’t imagine the stress of possibly sending someone to death as a result of the verdict either.  Watching this film is an experience, without a doubt.

The film basically takes place in one room.  After the first vote, there are 11 votes for guilty and one for innocent, which begins the process of examining the evidence.  In one of the most effective camera tricks in film, it continues to close in as the film progresses.  In other words, we start seeing the entire jury room and all 12 men.  As the movie continues, the camera gets closer and closer to each of the jurors as tensions continue to build.  It may or may not be noticed to the casual viewer, but it is really adds to the movie and the eventually conclusion.

The personalities and the conflicts that go on between them are a clear picture of what we deal with each and every day in human nature.  We are all different.  We all come from different backgrounds and beliefs.  It is no wonder this film is used to help people in management understand the differences in humans and human nature.

While all the performances are spot on, the one that stands out the most to me is that of Lee J. Cobb.  His performance is exhausting and perfect – and just one of the many reasons to see this movie. 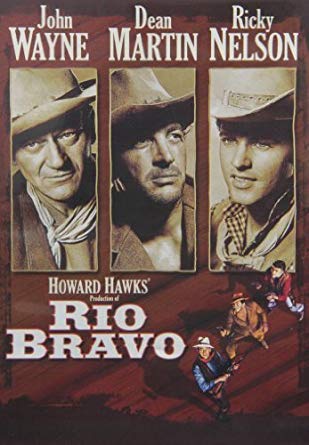 This one made my list as a guilty pleasure.  I love John Wayne, and have plenty of his films among my favorites, but it’s not his performance that stands out to me – it’s Dean Martin’s.

After Dean Martin and Jerry Lewis parted ways, there were many people who thought that Dean Martin’s career was over.  It almost was because of his first solo film (Ten Thousand Bedrooms), which flopped.  He came back to become quite a good actor and this is one of those performances that often cited as one that made his critics re-think what he could do. No surprise, Dean plays a drunk in this film.  His performance in this movie, to me, is one of his best.

The film was produced and directed by Howard Hawks.  Along with John Wayne and Dean Martin (who would also star together in The Sons of Katie Elder), the cast features singer/actor Ricky Nelson, the lovely Angie Dickinson, Ward Bond, and Walter Brennan.  It’s a good story, with something for everyone.  For me, I always come back for Dean’s performance. 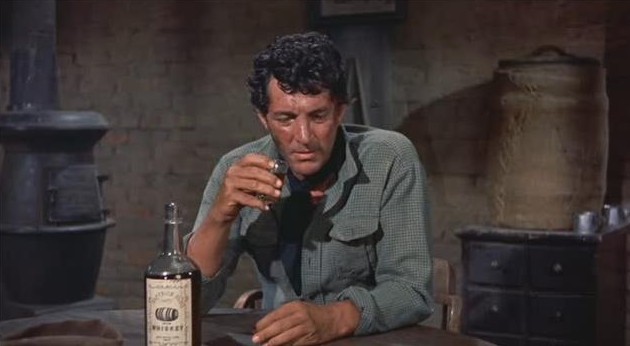 If you have never seen these five films (or the “honorable mentions”), I encourage you to check them out.  I also encourage you to surf over to the Classic Film and TV Cafe’ (www.classicfilmtvcafe.com) to read other entries in this blogathon, and read some other great posts.  I thank them for allowing me to participate and look forward to the next blogathon!

What are YOUR five favorite films of the ’50s??