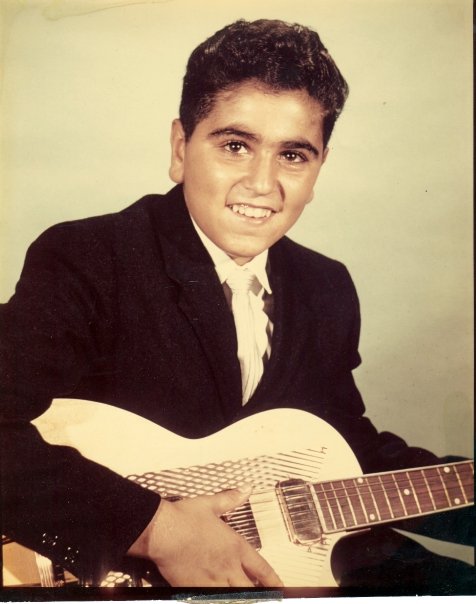 Over the years I have been influenced musically by many people, but I would have to say that it is my father who has had the biggest influence. This blog is sort of a continuation of the “series” I have been doing based on “songs from my iPod”.

My dad introduced me to almost every genre of music. My love for oldies music comes from some of my earliest memories of songs he played. I was also introduced to classic country and country music in general by him. He played in a wedding band for years – the first being Now & Then, and the second was Foxfire. I recall him sitting in front of the stereo playing along with 45 records of songs that they were learning for gigs. I remember long nights when my brother and I had to go to “band practice” as well.

Rock and Roll music was a staple in our house, probably because it was the stuff he grew up listening to. The first song that comes to mind is Dream Baby by Roy Orbison. As a kid, I would ask, “Daddy please play ‘boom boom boom….bum bum boom'”. This was a reference to the bass notes that open the song. I loved that song. While so many other folks always connect Roy to Pretty Woman (a classic, no doubt), I remember Candy Man, In Dreams, and Crying. Roy was awesome – and dad introduced me to him.

He also introduced me to Elvis. Man, Elvis was cool! Sure, every one knows Hound Dog, All Shook Up, and the biggies….but dad played me songs like Steamroller Blues, Moody Blue, and Way Down! He had the Moody Blue album (which was on Blue Vinyl) and Elvis In Concert and I remember playing them on the stereo many times. I remember the look on my dad’s face when the news came on the radio that Elvis had died. We were at the drive in movie getting ready to watch Smokey and the Bandit, when Honey Radio announced it. Dad was shocked. We listened to Elvis music until dark and the movie started.

I have to include another person in this section about music – my Godfather, my Uncle Tom. He and my dad grew up together and their exploits can be an entirely separate blog. For now, let me talk about R&B and “local” music. When I first started working at WKSG (Kiss-FM) in Detroit, my dad asked if I could find him some songs. I told him I would look and if they were at the station, I’d throw them on tape for him. These were songs that he and my Uncle Tom grew up listening to.

As I looked over the list, I remember thinking, “What the hell are these songs? Were these even hits? Who are these people?’ The result was me getting a taste of some really amazing music. I cannot listen to any of these songs without thinking of them. This is music that was stripped down, funky, and amazing.

Mind Over Matter by Nolan Strong jumps out at first. This song is classic! Backing Nolan on this is the group the Diablos. Simple instrumentation and a powerful vocal makes this one of my favorites. This was not a song that would play on the radio much in the late 80’s, and I recall watching my uncle and my dad listening to the tape I made and loving every damn second of it. I watched them become transported back to when they were teens and jamming to these songs for the first time – it was magical!

Village of Love by Nathaniel Mayer is another one that is worth a listen just for the bass singer – it is R&B gold!. Two songs that were on his list (and now on my iPod) that were local hits that I absolutely love were by the band The Dynamics. I’m The Man and Misery are two very different songs, but they capture the sound of Motown prior to the Motown sound emerging.

A couple oldies that were on the list which we actually played in a regular rotation at WHND Honey Radio were Don’t Let Go by Roy Hamilton, You Can Have Her by Roy Hamiliton, So Fine by the Fiestas, Let’s Go Let’s Go Let’s Go by Hank Ballard and the Midnighters, What In the World’s Come Over You by Jack Scott, and Agent Double O Soul by Edwin Star. I loved when these songs would come up on the play list.

Another one that would come up was the song You’re So Fine by the Falcons. Wanna talk about stripped down? This one was as simple as they come. It was recorded in a garage with probably one or two microphones. You can totally tell that they it recorded all at once on one track and it was one take. You can even hear a little guitar feedback at the end. GREAT song! I love it!

My dad was instrumental in introducing me to blues music too. One of those songs that he and my uncle asked for was Baby, What You Want Me To Do by Jimmy Reed. Wow. It is one of those songs that DEFINES the blues in my opinion. Other songs he had me listen to were Fannie Mae by Buster Brown, which we played at WHND, Baby, Scratch My Back by Slim Harpo, Shake Your Money Maker by Elmore James, and The Thrill is Gone by BB King. The blues and R&B music helped shape Rock and Roll and these songs are a must for my iPod.

I grew up in the Urban Cowboy era when country music got a lot of attention and a lot of radio airplay. I don’t know that I would say country music is my dad’s favorite genre, but he sure introduced me to some great artists and songs. He, of course was responsible for me hearing Willie Nelson & Johnny Paycheck (who are mentioned in other blogs), but he also introduced me to Hank Williams Sr. and Jr. I recall him playing the two of them singing a duet on Tear in My Beer. This was high tech at the time, they took Hank Sr’s vocal and isolated it and then Hank Jr. sang with him, It was a great song with just Hank Sr., but adding Hank Jr. was excellent.

Another song he played for me was Okie from Muskogee. The opening line is “We don’t smoke marijuana in Muskogee”…not exactly the best song for a 10 year old to hear, but I had no idea what it meant and I liked Merle Haggard’s voice. I also recall him playing Amanda by Waylon Jennings. It is probably one of my favorite Waylon songs. Such a simple ballad, but I could listen to it over and over. I also loved when he bought the soundtrack to Smokey and the Bandit II because it was the only place you could find a great song by Don Williams called To Be Your Man. Among other acts he played were the great Ronnie Milsap, George Jones, Juice Newton, and Charlie Pride.

Two country albums I remember him calling me in to hear were from Dwight Yoakam and The Kentucky Headhunters. The Headhunters album had a great cover of Oh Lonesome Me on there, but the song he played for me was Dumas Walker. It sounded fresh and almost a little rockish. I remember immediately getting this on cassette for the car. The other album was If There Was a Way from Dwight. In my opinion, this is one of his best. My favorite cut from the album was never released as a single – The Distance Between You and Me. The instrumentation is perfect and the lyric is classic – almost Brad Paisley-ish. I crank it up ALWAYS.

On the “pop” side of things, a few songs stand out, most of which because they were songs he learned and played for his wedding band gigs. The first one I think of is the Breakup Song by Greg Kihn. I remember him putting the 45 on the stereo, and playing that intro over and over. The first time I heard him play it note for note, I was blown away! I loved watching him work out licks and chords and stuff by simply listening to it on the stereo! America by Neil Diamond was another. By the time this one came out, he was in Foxfire and playing bass guitar, not lead guitar. These guys were good. Not that the other band wasn’t, I just know that they sounded amazing. Dennis, the lead singer, (and at one time my boss at my first job) NAILED his vocals. I could swear he was Neil Diamond! Every song he sang was dead on. Man, I miss that group of guys!

Probably the craziest musical incident involving my dad was when he introduced me to the music of Red Prysock. My grandmother always wanted to go to garage sales. I think my dad hated it. There was a familiar look of disgust on his face one day when she asked to go. While at one garage sale, he was going through old 45’s. His face lit up with boyish excitement as he stopped at one 45 with a black label on it. I heard him so, “I can’t believe it…” He bought the 45 and couldn’t wait to play it for me … and to be able to hear it for the first time in years. Hand Clappin’ was the song. It was a jazzy sax number that caused to you tap your toes. It was GREAT. It was like nothing I had ever heard. My dad said that DJ’s used to use it for their “theme song” back in the day. Still remains a favorite for me. Who says garage sales are bad?!

Over the years, my dad has called me over to the turntable, the cassette deck, the CD player, the mini-disc player, and his computer with the words, “Hey son, listen to this …” Very rarely was I ever disappointed. Today, I listen to almost every type of music and have always kept an open mind to genres because of dad. I am so lucky that he was such an instrumental (pun intended) part of my musical influence. Thanks, Pop!

One thought on “My Biggest Musical Influence – Dad”