I’ve never been one to put too much faith into “dream interpretation.” To me, it seems like it is often just someone’s opinion. Sometimes they make sense, but most of the time they just seem like some generic thing – like a horoscope. I may be wrong, and maybe there is something to it, but I really haven’t found it to be that way.

I have been having this one dream off and on for years, probably since I was about 10 years old. My brother and I are out in the backyard. Sometimes it is at our first house (at least I think that’s where it is), most of the time, however, we’re at my mom and dad’s. The old dog house that was there when we moved in is still in the back corner. The swing set is in the middle of the yard. It is no bigger than an average backyard.

While we are outside, the wind begins to pick up and dark clouds roll in. My mother will stick her head out the sliding glass door and call for us to come in because of storms. As I look up in the sky, a funnel cloud begins to form. (FYI: My grandmother told me all kinds of stories about tornadoes, which left me forever terrified of them) It is at this point that my brother and I begin to run toward the house. As we run, the yard begins to get bigger and bigger. It is like I am running and the house is moving farther and farther away.

My brother is running behind me and I am holding his hand. I keep looking behind us as the funnel cloud begins to turn into a tornado. It is windier and we are fighting to get to the house. We get to the swing set and we are being pulled off the ground by the funnel. We are literally hanging on to the bars of the swing set so we won’t get sucked away by the tornado. My mom is screaming to us, but cannot get to us. As I lose my grip on the swing set – I wake up.

This is one that I have a bit more frequently than the tornado dream. I mentioned it on Facebook once and was surprised that I wasn’t the only one to have this kind of dream. This one is the “band dream.”

Our band director was a man who I had great respect for. I think we all did. He was a good leader and taught us many lessons. He was strict and stern. You always tried to be prepared for class. Sometimes you weren’t and he knew it. I remember this one song that had a simple chromatic scale at the beginning of it. It was a fast tempo song, so if you didn’t practice it, you could easily blow it. We all started the song, started it again, and again until finally he pulled out the grade book and made every one of us play it. You either played it right and passed or played it wrong and failed. I failed it.

In the dream, all the old band classmates are there. I can’t really look at them and say what year it is. Many times its just all the people who were in band at one time or another. There is often things going on that are just weird – like bubbles coming out of clarinets or water coming out of the tuba. Many times we are rehearsing songs I remember playing while in band. Other times we are working up songs I have never heard. Sometimes famous people are in the dream rehearsing with us. There is no specific or common ending to the dream.

While this dream can often cause me to feel anxiety, I usually wake up from the “band dream” chuckling at the absurdity of what was in it. I also wake wishing that I could go back to those days when I still played well. I can barely make a sound on my trumpet today. I miss playing in band. It was, one of my favorite things about high school.

I probably have one or two other recurring dreams, I just forgot them right now. I’ll remember them after I have them. I don’t know what makes me dream these same dreams. I don’t know what prompts them. I have always found dreams to be very cool. They can be very real! They can make you feel real emotions. Every once in awhile, they can be a little too real.

Other times, a dream, which you can’t explain, can make you look back at it and wonder. I had one of those too. When I was going through my divorce, I had a ton of stress. I woke up crying one night after having a dream. I dreamt my mom was talking to me. I was upset. She looked at me and said, “It’s going to be alright, honey. You are going to come out of this and things will be just fine.”

What are your thoughts on dreams? I’d love to hear them. 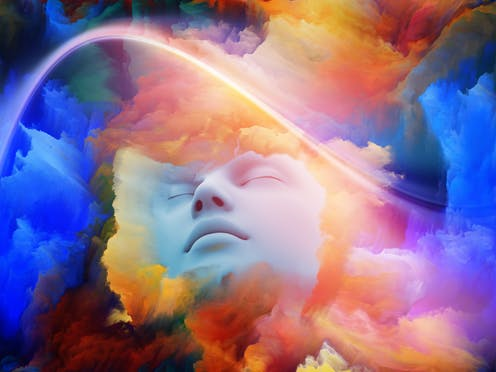