My first job was a paper route.  I delivered for both the Detroit Free Press and the Detroit News.  I guess I was probably about 10 or 11.  Some of your customers paid the paper directly, but most of the time, you had to go door to door to “collect” for the week’s deliveries.

My dad decided since I was making money, I’d need to have a bank account to put the money in.  He went with me and I opened an account at Michigan National Bank.  I think he had hoped that I would put money in there and save it for when I needed a car or something.  The fact that the bank was basically in the parking lot of the Hoover Eleven shopping center, which was almost directly across from my paper route, was probably a bad idea!

There were two stores in the shopping center that ended up with most of my money.  The first was Circus World, a long gone toy store where we bought the latest Star Wars toys, Matchbox cars, and toy guns.  The second store, and the one that got most of my money, was a record store called Harmony House.  Oh, Harmony House, how I miss you!!!

When I had my paper route, Harmony House was located in the original wing of the shopping center.  I had a turntable in my bedroom and I would go and buy 12 inch LP’s, 45 singles, cassettes, and eventually CD’s.  Some of the music blogs I follow have often said, “You never forget the first album you bought with your own money.”  I can say that isn’t true.  I don’t remember mine.  I can tell you the ones I bought, but don’t remember my first.  This is probably because many of the albums my dad had ended up in my collection.

What I remember is walking in and there was a wall which had a pegboard on it.  On the pegboard, there were pockets which had the new 45 singles on it.  Each pocket contained about 20-30 45 records in it.  On the front of the pocket was the title of the song and the artist.  If you were to compare that wall to the Billboard chart, it was basically the Top 30 or 40 songs that were being played on the radio.  I remember buying “Crazy Little Thing Called Love” by Queen on 45.

The above pic is not really what the wall in Harmony House looked like, but it gives you an idea.  Looking at the picture, it reminded me that I lost the adapter that you put on the turntable to be able to play 45’s.  With an LP album, there was a small hole in the middle of it that the spindle went through. In the above picture you can see that hole on the “Creepers” record.  The hole on a 45 was much bigger, as you can see in the majority of the 45’s shown in the picture.  It seems to me that I had about 50 of those yellow 45 adapters at home for my collection!  It snapped in the record so you could play it. 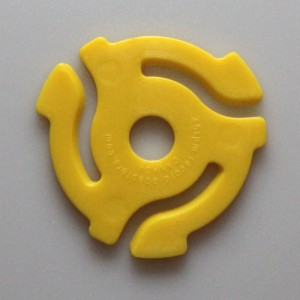 The singles were often released in hopes that you’d buy the album when it came out.  I was buying albums from artists that my dad introduced to me like Roy Orbison, Elvis, and others.  If I had to take a good guess, I would imagine one of the first albums I ever bought was from the Beatles.  Probably Beatles 65 or Beatles VI – both of which I loved!  In elementary school we had a “Record of the Week” which each class voted on and we could all bring songs in for the class to vote on.  I remember bringing in a Beatles Album.

I used to spend hours in Harmony House!  I remember that occasionally there would be a huge cardboard cut out of a local DJ (like Arthur P from WRIF) with a spot for 45’s.  It would be their “Pick of the Week”.   They had a listening station where you could put headphones on and listen to the 45’s and you could probably find me there 50% of my visit!  I used to love talking about music with the people who worked there and became good friends with them in doing so.  It was always cool to have one of them say, “If you like that … you will really like _____!”

Vinyl sales started to decline with the rise of cassette tapes and cassingles (a single song on a cassette).  I used to take a vinyl album and record it to cassette so I could play it on my Walkman.  Then, I just started buying albums on cassette.  I DO remember the first album I bought on cassette –

Eventually, CDs became the way to get your music.  I remember when they first came out, they came in a HUGE box!  The CD would sit at the bottom of the packaging, and the top half of it was pretty much nothing.  Now, when you buy a CD, all you have to do is remove the cellophane around it – back then you had to crack open that huge box!

Let me preface this by saying I realize that I am probably gonna sound like an old man here, but I hate the fact that more and more music is being delivered digitally.  That being said, I will say that in some cases it is great – like for DJing.  All my new music is downloadable and clean edits.  It does make that very easy.  However, I miss the days of listening to an entire album from start to finish.  I miss picking out the songs I hoped I would hear on the radio.  I miss comparing “notes” with other friends who bought the album to hear what songs were their favorites and why.

It seems that there is little interest in albums anymore.  Hell, back in the day, there was a radio format called “AOR” which stood for “album oriented rock” and you got to hear those cuts that weren’t being played anywhere else!  My Tune Tuesday blog this week about Dwight Yoakam was about a song that never played on the radio, but it is still a great song and one of my favorites!  Think about growing up – no doubt you have an album that you could put on and play it from start to finish and you loved every song!!  Right??

I guess one of the things I miss most about record stores, aside of the music that I bought, is talking with people about music.  I loved being able to talk to staff members about music that had just come out.  I remember talking to a guy at Harmony House all the time about the “Future Releases” that were coming out.  We’d look at the list each week and talk about it.  It was always a great conversation when an artist would do something “different” from what they normally did (Pat Benatar’s True Love album comes to mind).

I had the same experience later on with a place in Roseville called Record Time.  My buddy Ken was the manager of the Oldies Department there and would steer me toward great imports and hard to find songs.  I had so many rare and hard to find CDs in my collection because of him.  Even though our music preferences weren’t always the same – it was always great to share thoughts with him.

The other great thing about a record store is bumping into other music lovers.  So many times I’d be looking at the back of an album and another customer would walk up and say, “That’s a great LP!”  Those random conversations could also lead to discovering new music too.

It is nice to see that vinyl records are making a comeback.  I think it’s crazy that they are trying to sell them for $30 an album, especially when you can get the CD for $15-$20!  There is something to be said about hearing a song on vinyl, though.  I don’t really even know how to describe it, maybe you can help me do that, but the best I can do is – it sounds “fuller” and more “real”.  I don’t know, maybe that’s just the old man in me….

Today, I am forced to look for CDs (if I am buying any) at Walmart, FYE (which is slowly becoming non-existent), Barnes & Noble (which is usually WAY overpriced), or online.  It’s not the same.  If I am at Walmart, the guy next to me looking at CDs is really there to buy toilet paper, not there solely to buy music.  With the internet, we have instant access to album reviews, which can be useful if you know what you are looking for.  I miss hearing about something that I didn’t know about from a fellow music lover.  I miss walking into the record store and hearing something playing in the store and wondering “Wow!  I like that!  Who is this and how can I get it?!”

Thank goodness there are still a few stores around that sell used CD’s, records, and even movies.  Sadly, they are as close as we’ll come to Harmony House or Record Time.

20 thoughts on “I Miss Record Stores!”