This is the first year I didn’t have any “squares” for the Super Bowl.  I am sure I could have purchased some.  Some friends on Facebook posted that they had some available, the issue was getting them the money (let alone the fact that money is pretty tight right now anyway!).  I usually get a square or two from a few people every year.  Since I began working on Sundays, I rarely go to Super Bowl parties, and the opportunity to get squares seems to be more difficult.

I was first introduced to foot ball squares when I bowled on a Sunday morning league.  I bowled at a small place called Pastime Lanes.  It was a cool place because the owners were awesome and everybody pretty much knew everybody.  I watched my buddy Joe bowl a 300 game there!  We were usually done bowling by 1 in the afternoon, and during football season, many of us went into the bar afterward to eat and watch the game.  It didn’t matter if it was the home team (Detroit Lions) playing or not. 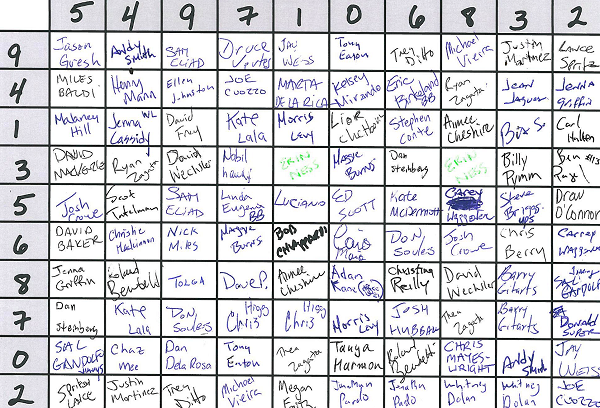 The above picture is what a typical “board” would look like.  Each square cost $5 or $10 and you’d buy however many you wanted.  After all the squares were filled, numbers were drawn and filled in on the top and side.  Each side of the board was also assigned a team.  The numbers would correspond with the score at the end of each quarter.  For example if the Lions were on the left and the Patriots were on the top, and the score at the end of the first quarter was Patriots 14 – Lions 0, you would find the 4 on the top and the 0 on the left and the winner is …Chaz Mee.  I never got rich off the squares, but hitting for $50 every so often was nice.  A buddy of mine on Facebook hit a square for $2000 during the Super Bowl (that’s a lot of diapers!)!

I wouldn’t consider myself a big gambler.  I will buy an occasional “instant” scratch off ticket when I pump gas.  I will also play the daily 3 digit every so often.  When I play the 3 digit, it is often the birthdays of my boys and my wife, my anniversary, and my old license plate number – 596.  Sometimes, I win, but most often I lose.

Gambling is something many take seriously!  You can literally bet on anything!  The morning show on one of the stations I work at was talking about the list of “prop bets” people were making on the Super Bowl.  It was crazy stuff!  I had never heard the term “prop bet” before.  For those who don’t know what it is it is defined this way on Wikipedia: in gambling, a “proposition bet” (prop bet, prop, novelty, or a side bet) is a bet made regarding the occurrence or non-occurrence during a game (usually a gambling game) of an event not directly affecting the game’s final outcome.

Prop bets can be:

I’m sure that there are crazier things than the above that people bet on during the game.  I’ll stick to squares…

We didn’t wager for any money on this one, but I did go to my Facebook family and friends and ask when they thought our baby would be due.

I didn’t make a cute chart like the above picture, but I do have all the guesses on a spreadsheet.  As each day passes, we get closer to the due date (2/16).  My wife guessed 2/20.  She liked the idea of her birthday being 2/20/20.  I liked the idea of 2’s, as well, so my pick was 2/2/20 (without really thinking about the palindrome thing).  Needless to say, I am officially out of the running now.  It would have been cool to tell her “Daddy, knew what day you were going to be born!”  With each passing day, I cross of the day and the people who guessed it.  Only two of my friends actually picked the actual due date.

Despite the fact that she picked the 20th, my wife is MORE than ready for the baby to be here.  I am sure she will not mind at all being wrong about the arrival date! We are Week 38 today and if she waits until the due date, it is going to be a LONG and MISERABLE two weeks!

The wait continues … maybe I can come up with some prop bets??