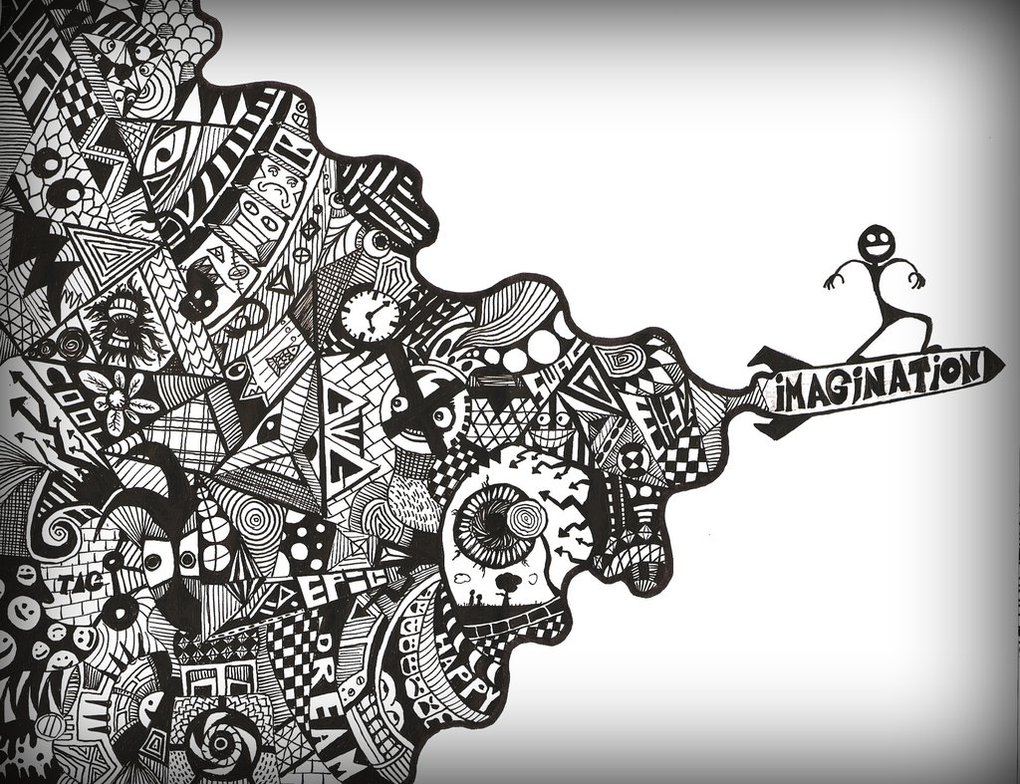 The following blog is based off a speech I had to do in college.  It was a persuasive speech.  While most students tried to persuade me to think one way or the other about marijuana, assisted suicide, or some other hot topic items that I knew my professor had heard a gazillion times, I wanted to do something different.  I wanted to persuade the class to use their imaginations!

I am going to attempt to transform my notes from the speech into this blog and include links to the sound files that I used to illustrate my points….

Without any further ado – get ready to imagine:

There is an old saying, “Seeing is believing”.

We live in a society where we can access images of just about anything. We can find them on television, the movies, and all over the world wide web.  However, I’d like us to conjure up an image without having to plug anything in.

I know we are in a speech class and eye contact is important, however, for the purpose of this I need you to close your eyes and listen. (For this part of the blog, I guess you need to keep your eyes open, but you’ll get the illustration).

You are looking at a table. On top of the table is a large lemon.  It is a bright yellow and at its peak ripeness.  Next to the lemon is a sharp knife.  Picture the knife slowly cutting into the lemon.  You can hear the knife cutting through the rind, and you can see the juice coming from the lemon onto the table.  The lemon is now in half.  I want you to pick up the lemon, and bring it towards your mouth …and take a bite into it.

Now open your eyes. How many of you could actually taste the lemon?

Now look down …do you see a real lemon? Of course not.  However, you did SEE it…and seeing is believing.

In radio, we often refer to using the “theatre of the mind”. As someone who has worked in radio for almost 30 years, I have witnessed firsthand the decline in the use of one’s imagination.  There was a time, not so long ago, children would use their imagination to create adventures – to go places they’d never been before – and pretend to be famous athletes, princesses, or dinosaur hunters.  Today, television numbs their minds by spoon feeding them images; video games are graphic and scenarios are predetermined.  Their imagination lies dormant.

Sadly, it’s not just children who no longer use their imagination, but adults too.

In the next couple minutes, I will illustrate the power of the imagination, and by doing so, cause you to want to use it on a more frequent basis.

Prior to television, families would gather around the radio every night and their imaginations would run wild.

I want you to listen to a clip from 1948. Marion and Jim Jordan were Fibber McGee and Molly on the radio.  One of the show’s running gags, was Fibber’s messy closet.  You are about to hear the first time the gag was used.  The McGee’s are trying to figure out what a word means and are looking for the dictionary.  They think it is probably in the hall closet, which we are told is full of McGee’s stuff.  (For blog readers – you need to go to the 4:00 mark to hear the bit.)

What color was the door?   What did you see fall out of the closet?

Each one of us saw a different closet door. Maybe it had a glass door handle or maybe it was brass?  Maybe it opened to the left or opened to the right? All of us heard the same clip, but we all aw something different – our own vision of the door and the stuff that fell out!

While technical advancements make life easier for us, the human imagination is being threatened. Technology encourages us to relax our minds and let others make decisions for us.

In his article, the Death of Imagination, Duane Loose makes reference to the book “Sibling Society” by Robert Bly. Bly suggests that the measurable decline in the imaginative process of forming imagery in the mind is a direct result of the power of TV, movies and other intense visual media.  These things cause humans to bypass the imagination by feeding explicit images directly into the brain.  No imagination is needed, so the brain doesn’t have to work.  This results in a slow death of the muscles of the mind, because there is no need to form images when they are provided for you.  Scientists say that this will ultimately destroy the human ability to imagine.

To further illustrate my point, think about reading a book in contrast to watching television:

Watching television requires little thought for you to absorb the images, speech, and music which are a part of the program. Reading a book, however, requires imagination to turn letters into words, the words into thoughts, and the thoughts into images and actions.

Entertainment, so called, today requires no imagination. Even the creators of entertainment today lack imagination.  All you have to do is count the slew of old TV shows that have been made into below average movies to see that they lack any type of new idea!

To further prove the power of the human imagination, I want to tell you about a program that aired as a Halloween themed adventure. On October 30, 1938 radio caused an entire nation to panic.

The Mercury Theatre on the Air, broadcast it’s version of “War of the Worlds” with Orson Wells. As crazy as it sounds today, families listening to the broadcast actually thought that the earth was being invaded by Martians and that the men from space were destroy parts of New York.  The panic that ensued only proves the power and quality of the shows that aired at that time.

It also speaks volumes as to the actors acting ability to stimulate the imagination and make the program believable.

In an 1984 interview, Himan Brown, described radio actors and how they worked. He says, “Their voice and what they did with their voice.  What they did with the words.  They didn’t read- they played.  They touched, they felt.  There was a tremendous relationship in everything and the skillful actors were absolutely brilliant”.

Suspense, was a show that aired on CBS radio from 1940 to 1962.   It was often referred to as “radio’s outstanding theatre of thrills”.  Each week, the listener could hear stars like, Lucille Ball, James Cagney, Katherine Hepburn, and Jack Benny as the show’s weekly guest star.  Stars were drawn to the show, because it required that they actually perform.  The great Cary Grant said, “If I ever do any more radio work, I want to do it on Suspense, where I get a good chance to act”.

One of my favorite Suspense shows was based on Cornell Woolrich’s short story, “Three O’Clock”, which stars the great Van Heflin. A husband (Heflin) thinks that his wife is cheating on him.  He decides to get rid of his wife by building a bomb in the basement.  He wires the detonator to an alarm clock and sets it to go off at “3 O’Clock”, when he will be back at his office.

What he doesn’t plan on is being caught by two burglars when he comes upstairs.  They haul him off to the basement and tie him up and gag him.  What we hear is what he is “thinking” as he is counting the minutes until the bomb goes off.  It is one of the best episodes of the series in my opinion. Take 30 minutes and Notice how the use of sound effects and descriptions by the actors enhance the story and make the tension even greater!

A well written story, performed brilliantly by amazing actors, and brought to life within YOUR imagination!  Everyone listening pictured the characters differently, saw a different basement and different clock.  The imagination is a wonderful thing!

Now, go and imagine something!!!

Sherri Mandell defines imagination as: “the ability to remember, dream, create, improvise and in the process entertain oneself anywhere and anytime.”

We’ve seen how modern technology and entertainment hanker the human’s ability to use their imagination to its fullest potential. We’ve heard of the future ill effects of the non-use of imaginations.  And we’ve dusted off the cobwebs in our mind and used our imaginations a little.

I’d like to encourage you to continue to use it. There are countless hours of old radio shows available online, there are millions of books at the library, and it really isn’t a bad thing to turn off the TV and  daydream every once in awhile.

I will close with another quote from Sherri Mandell, “The next time you see a child lost in a daydream or in an imaginative game, sit down next to him. You might just discover the lost part of yourself, the authentic self who engages with the world without premeditation or pretense and disguise.  The self who dwells in fantasy.  The free and authentic self who is content to just be.”