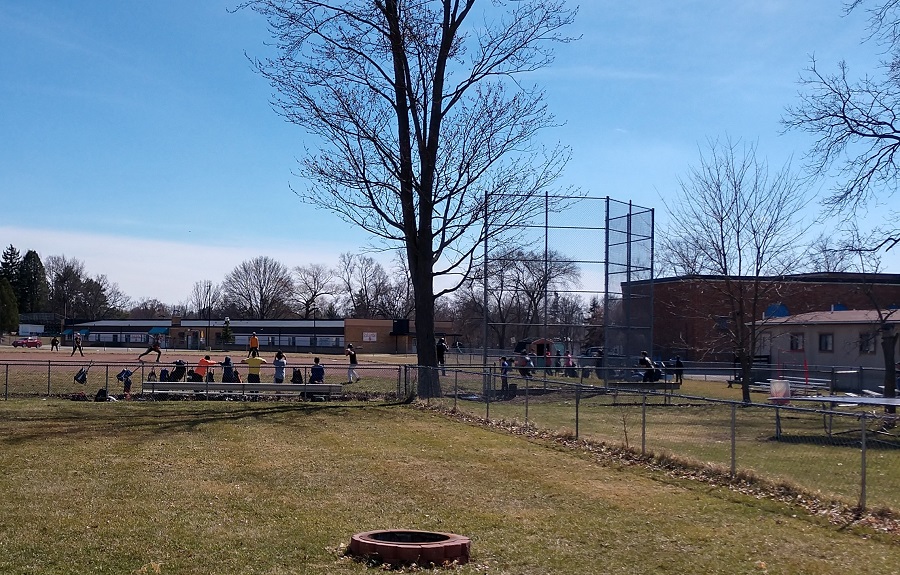 I took the above picture while standing in my backyard before I left for work.  Baseball practice has begun for our school district.  I always enjoy watching the kids and coaches work on plays.  Today they spent some time working on fielding a bunt and throwing to first base. As I stood there and watched, I was reminded of a post that my friend Andy had posted on Facebook recently.  He said “I wanna go back to when my only problem was if we didn’t have enough guys to play all fields open for baseball.” Those were some of the BEST summer days! Pardon me, while I step back to when I was in elementary school…..

My love for the game.

I don’t really recall when I became interested in baseball, but I remember it always being a part of our summers.  If my dad was out washing the cars or doing yard work, the Detroit Tigers were always on the radio.  The voices of Ernie Harwell and Paul Carey made all the calls.  When we would visit my grandparents, we would often watch them on TV as George Kell and Al Kaline announced the game.  I have been a Tiger fan for as long as I can remember.

I remember struggling to throw the baseball.  That’s where dad came in.  If I have never thanked him, let me do so now.  Thanks, Pop, for always making time to go out and thrown the ball around.  He’d call balls and strikes as we played catch.  He would occasionally throw me his “submarine” pitch (which was kind of a side arm pitch like Dan Quisenberry).  We went to the library and I checked out a book that showed how to throw a fastball, slider, curveball, and more.  Dad showed me how to throw a knuckleball, which I STILL love to throw.

There were two ball diamonds at our elementary school.  One had a backstop and faced the school.  The other was kind of a makeshift diamond that had dirt patches from where kids had made bases.  There was no backstop, and it had ruts in the grass from where kids ran from base to base.  There was also a spot for home plate and the pitcher’s mound was hardly a mound.  This field faced the other diamond and the road.  This was usually the diamond we played at.

One of the downsides of playing at this diamond was that it was that the school was about 10-12 feet behind us.  If you popped a foul ball behind you, it ended up on the roof.  Whether the game continued depended on 1) whether you had someone who could climb up to the roof to fetch it or 2) if you had extra baseballs. A benefit of playing here was there was a little valve on the school that if you had a wrench, you could turn it and get water – perfect for hot days.

Teams of Many Players

I remember during the summer I would wake up, eat breakfast, get dressed, grab my mitt, put it on the end of my bat, grab the baseballs, get on my bike and head to the school.  Along the way, I might knock on a few doors and pick up other players, but it was rarely necessary.  It was a standing appointment every day.  We’d all meet up at the school and pick teams.  We’d do the hands on the bat thing to see who was up to bat first. 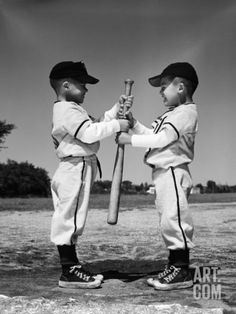 Depending on how many kids showed up, we’d have to alter the rules a bit.  Sometimes we had to have a designated pitcher. If we didn’t have enough fielders, right field was out (unless you had a left-handed batter).  Sometimes we had to go catcher-less.  Many times when there was no first baseman, the pitcher’s mound was “out”! Then there were times where we were so short, we’d have someone hit and run to his base while the person on third base came back in to bat again with the “ghost runner” on the base.  It didn’t matter – we’d find a way to play!  Even if there were only three guys – one would pitch, one would bat, and one would field.  We spent SO many hours playing ball!

Off the top of my head, I remember Jeff, Tom, Bill, Frank, Mike, Steve, Leo, John, Danny, Dave, Carl, Tomlin, Ed, Mike Smith, and so many others playing ball.  If Andy and his brothers Ray and Tommy, were home, they were always there too.  There was a wide range of ages, and we often let some of the younger kids play.  I am sure that my dad came up once or twice to pitch to us and “ump”.

Just like in professional ball, there were amazing catches, close plays at first, strike outs, arguments with umpires, and long drives to left field for home runs.  We often “called” the games like Ernie Harwell.  If we all had a dollar for every time we said or heard “Hey, batter, batter!  SWING”, we’d be debt free!  There were no uniforms, but you could bet that almost every one of us had a Tiger baseball cap on!

Day after day, all summer long we played ball.  I wish I could remember more detailed stories of our baseball heroics, but most of them have been lost with time.  Perhaps some of the guys I mentioned (and tagged on Facebook) can recall a story or two I can add to this blog.  I do have one memory that I can recall as clear as day….

Mike lived across the street from us and was always up for baseball.  Mike was a big kid.  He had some power when he made contact with the ball, no doubt about it.  I do remember taking away a home run from him once.  At any rate, because of his size, he didn’t really run fast.  The distinct memory I have of him is this – if you were the catcher and Mike was running home, you had better hope to avoid him and get the tag on him. There were many catchers who caught a ball from the outfielder who stood in front of Mike as he charged home, only to get plowed and knocked on their ass!  Mike knew his body was like a Mack truck and was not afraid to use it!  If he could plow into you and make you drop the ball, he was all about that.  I learned that the hard way once!  I can’t remember how long it took me to catch my breath after he had knocked the wind out of me, but it seemed like eternity!!

I am glad that I grew up at a time where kids actually wanted to play outside.  Today, trying to get my boys to go outside and play is a chore!  There is the Xbox and Wii U and games on their phones that make them want to stay inside.  It is sad.  Both of my son’s played T-ball and Baseball and I was lucky enough to coach each of them.  They never really chose to continue playing, but every once in a while, they’ll be happy to throw the ball around with their old man and that makes me feel young again. 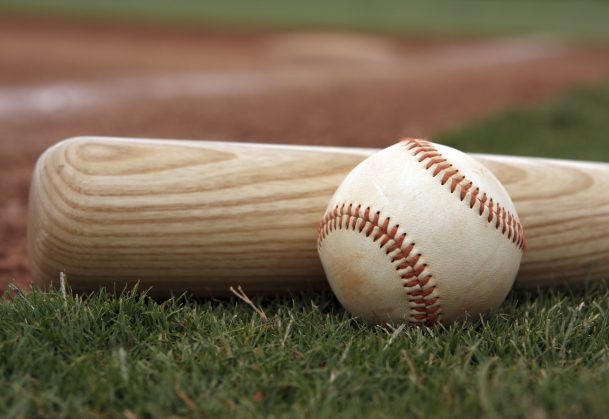 6 thoughts on “The “Carlson” Boys of Summer”