After a few serious blogs, I decided I needed to write about something a little bit less … deep.  This is about a silly and campy a topic as I can come up with.

Depending on the source, either September 15 or September 21 was National Batman Day.  Either way, I missed it.  It was to celebrate 80 years of the Caped Crusader.  Batman first appeared in the comics in 1939 and has been keeping the folks of fictional Gotham City safe from the onset.

Yes, there have been many different versions of Batman throughout the years, but for me, the version that will always remain my favorite was created in 1966.

I was not yet born when it first aired on TV, but I watched it faithfully with my brother in reruns.  To be honest, as a kid watching this show, I had no idea just what the show did to pop culture in 1966.  It was HUGE!  Radio stations used the infamous Neal Hefti theme song for their jingles.  People were using onomatopoeias in every day conversations, along with “Holy” catchphrases!  Batman was everywhere!

The phrase “Same Bat Time.  Same Bat Channel.” were used in everyday language.  It was a reference to the fact that the first episode would end with our heroes caught in a trap.  Certain death awaited the Dynamic Duo.  The cliffhanger episodes ended telling veiwers to tune in tomorrow to see IF they can escape (which they always did!).

The 1966 Batman was quite different than what had been seen on screen or in the comics.  The producers of the show did it with a campiness that was at times, just plain silly.  One has to wonder if the cast had been different, would it have worked? 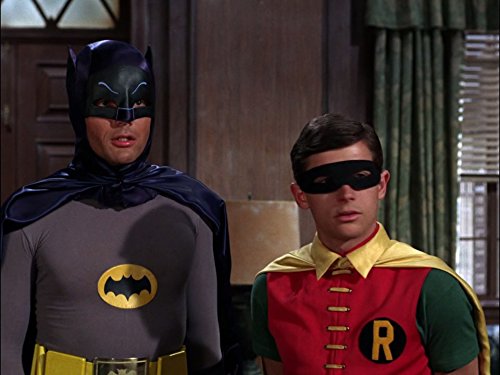 The Commissioner Gordon of 1966 is SO unlike the Gordon of Fox’s Gotham.  He is played by the great Neil Hamilton.  Chief O’Hara is played like the stereotypical Irish cop from so many movies and radio shows by character actor Stafford Repp.

In the comics, Bruce Wayne’s butler, Alfred, had been killed off before the show began.  Needless to say, his death was reversed.  He is played to perfection by Alan Napier. 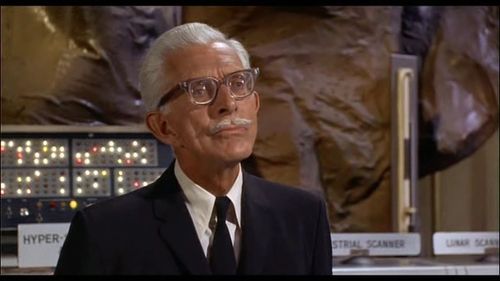 Aunt Harriet Cooper was played by Madge Blake, who many will remember from Leave it to Beaver.  Blake fell ill during the show and appeared less and less. 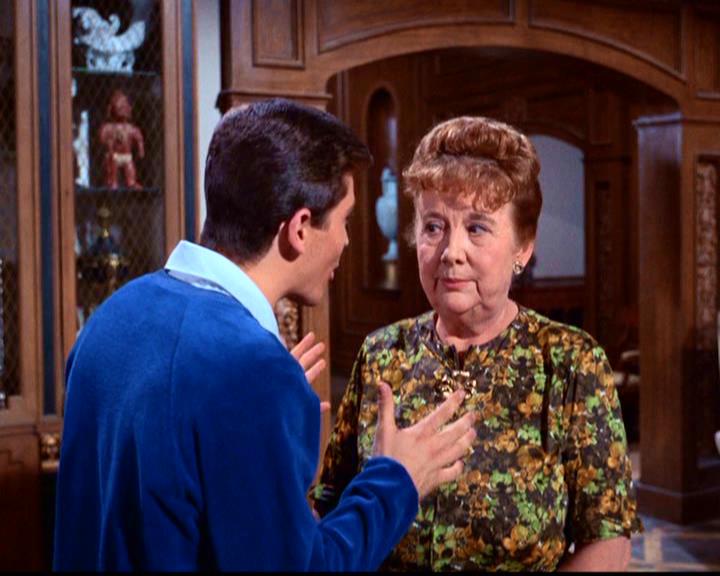 In season 3, the two day back to back episode format was abandoned and the character of Batgirl (who was really Barbara Gordon, daughter of the Commissioner) was introduced.  She was played by the amazing Yvonne Craig.

Outside of the campiness of the show, I think what made it such a hit was the villains.  Batman in the comics introduced readers to many of the Batman “staple” villains and so they were known to Bat-fans already.  Personally, I need to give kudos to whoever did the casting of the villains for the TV show!  In all honesty, it is hard for me to imagine anyone else playing these characters (although some have done quite well).

When you watch the show, you will notice that when a villain is on screen, the camera always shoots them at an angle.  The reason is that it was to convey that the villains were a bit off kilter or “crooked”.   By the end of the first season, Batman was such a big hit that celebrities were lining up to be villains.  Many stars just wanted to be ON the show (which explains some of the cameos).  While there are many villains, here are some of my favorites:

Cesar Romero – The Joker. Romero was known for playing romantic Latin lovers in many movies.  When asked to play the Joker, he refused to shave off his trademark mustache.  The cast him anyway and they painted the makeup over his mustache!  Look at the picture below and it is clearly visible.  His over-the-top performance as the Joker and his amazing laugh made the character so much fun to watch!!

Frank Gorshin – The Riddler.  Gorshin had starred in over 20 films by the time he was cast in Batman as the Riddler.  Those included That Darn Cat, Where the Boys Are, and The George Raft Story.  He was popular in night clubs and on TV and was an amazing impressionist (He did one of the BEST impressions of Burt Lancaster!).  As the Riddler, he was like a cat high on catnip!  He was all over the place!  His laugh was perfect for the role.  The laugh was supposedly inspired by Richard Widmark’s character in 1947’s Kiss of Death.

Burgess Meredith – The Penguin.  Burgess was called “one of the most accomplished actors of the century” and I would tend to agree.  There is very little that I have seen him in where he is not amazing to watch!  He and Cesar Romero are tied for the most appearances on Batman.  As the Penguin, he is just marvelous!  Penguin trivia:  Burgess had stopped smoking prior to taking the role.  He developed the “quack”ing to hide the fact that he wanted to cough because of the smoke.  Word is that he was so popular on the show, the producers ALWAYS had a Penguin script waiting for him. 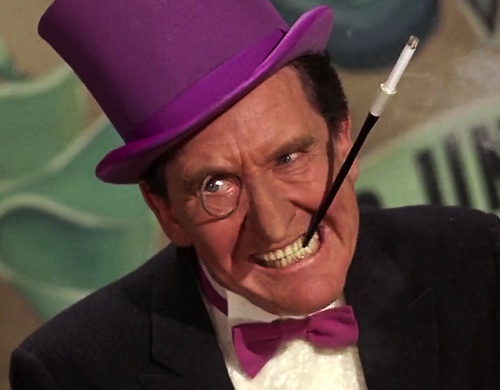 Catwoman – Julie Newmar and Eartha Kitt.  Hands down, Julie Newmar is my favorite!  Her sultry voice fits the character.  The way she flirts with Batman, you can tell there is something there, but it can never be because one is good and one is evil.  Julie was a star on Broadway (and Tony Award winner) before Batman. She did many guest appearances on TV too (F-Troop, Route 66, Columbo, and more).  Her Catwoman costume is in the Smithsonian! 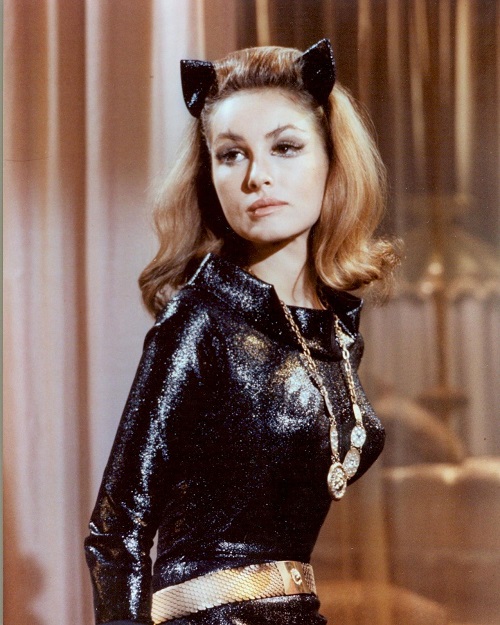 Eartha Kitt makes my list because her take on Catwoman is SO different from Julie’s.  Her growl and the way she rolls her “r’s” is reason enough for her to be mentioned.

Notice: Julie raised the belt on the costume a bit – so it enhanced her figure.

David Wayne – The Mad Hatter.  I always liked David Wayne as an actor.  He appears in one of my favorite Twilight Zone episodes and was in many movies by the time Batman cast him.  He appeared in four films with Marilyn Monroe and also appeared with Frank Sinatra in The Tender Trap.  Like the other villains, Wayne is over-the-top is his portrayal of the Mad Hatter.  His exact pronunciations of words with such great diction makes his performance that much more believable. How can you not dig his crazy hat with the eyes that pop up to hypnotize his victims to steal their hats?!

Vincent Price – Egghead.  Vincent Price was a star!  He was the Saint on radio, he had appeared in who knows how many movies, and narrated Michael Jackson’s Thriller!  Egghead was a villain that must have been created for the show, as I don’t know that he ever appeared in a comic book.  He was a super intelligent villain, maybe the smartest.  His language consisted of “eggy” puns.  He was just fun to watch.

Rudy Vallee – Lord Marmaduke Ffogg and Glynis Johns Lady Penelope Peasoup.  I really don’t know why these two make my list.  They only appear in Season Three of the show and it does not take place in Gotham City.  The episodes take place in the fictional town of Londinium.  The entire Gotham crew, including Batgirl, are there (yet no one connects the fact that Batman shows up at the same time Bruce Wayne is visiting!).  I remember these episodes for a couple things – the fact that his pipe can fog up an entire town (or so it seems) and Robin is almost stung by this huge, and obviously fake, bee.  Watching Vallee in this role, you can see (like almost all villains) that he is having a lot of fun with the character. 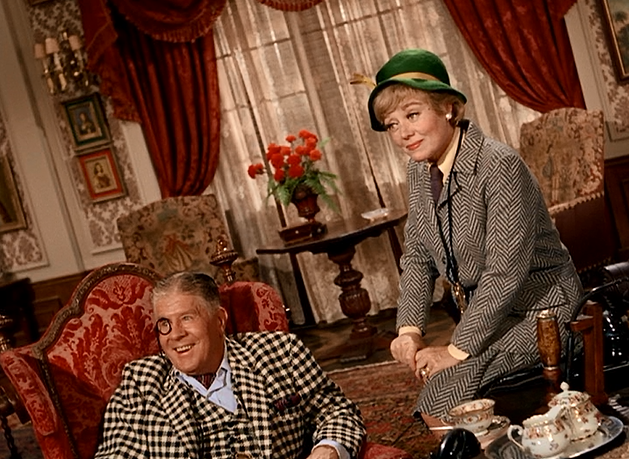 Shelley Winters – Ma Parker.  Here is another example of an actor/actress who just is amazing in anything she plays (check her out in Night of the Hunter).  Shelley Winters is brilliant as Ma Parker (an obvious parody of the real Ma Barker and her crime family).  She’s crazy and shows a wide range of emotions throughout her stint on Batman.  I really wish they had brought her back for more!

Victor Buono – King Tut.  Talk about an over-the-top performance!  Victor is said to have loved playing this role.  He said it gave him the ability to have fun and just be silly.

Ethel Merman – Lola Lasagna.  What?!  Ethel Merman!?  Yep.  Bonus – she’s in an episode with the Penguin. 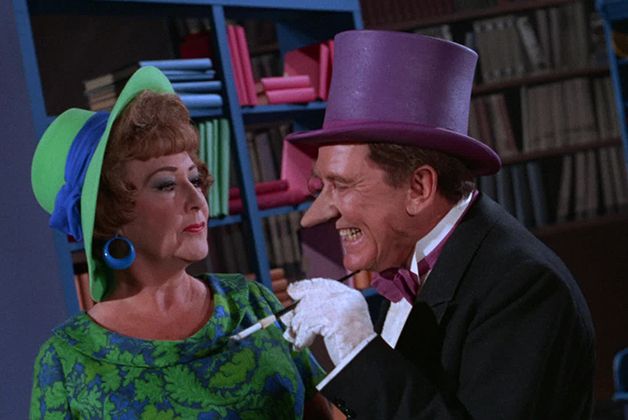 Liberace – Chandell and Harry.  This one is just silly, which is why I love it!  Chandell is a criminal (known as “Fingers”), but only a criminal because he is being blackmailed by is evil twin brother Harry.  Liberace alone is enough, but Liberace playing a dual role – LOL!!!

There were many other celebrities who played villains on the show – Art Carney, Cliff Robertson, Van Johnson, Carolyn Jones, Joan Collins, Zsa Zsa Gabor, Roddy McDowell, Ida Lupino, and SO many more!  All were great, but really only good for one stint.  The villains really made the show fun to watch.

The wait was long for the show to finally make it to DVD/Blu-Ray, and when it was released, I ran out and bought it!  As silly as it is, I still will watch it and love every minute of silliness!  Happy Belated Batman Day! 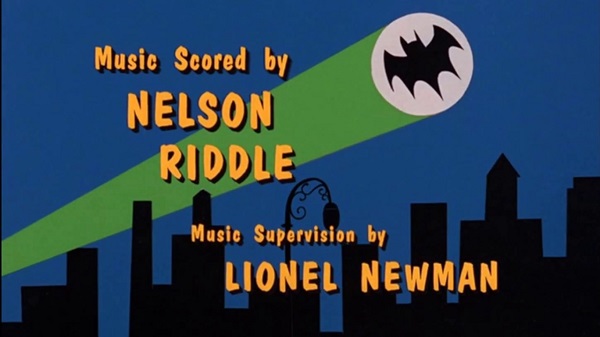 One thought on “Holy Batman Day!”