This blog is part of the 6th Annual Favourite TV Show Episode Blogathon, hosted by A Shroud of Thoughts.  This is my second year taking part in it.  The rest of the entries can be found here:

I could have picked a few episodes from Sanford and Son.  It remains one of those classic shows that makes me laugh out loud.  Home Sweet Home is from the fourth season of the show.  It is the 7th episode of that season.  It originally aired on October 25, 1974.  The episode is full of some great lines and physical comedy from Redd Foxx.

Greed is a powerful thing.  It is also a great premise for comedy (It’s a Mad, Mad, Mad, Mad World is a classic example).  Fred and Lamont return from a miserable camping trip when their neighbor, Julio comes knocking on the door with news.  He informs them that a Japanese company wants to buy up all the houses on their block to build a brewery.  All they need to close the deal is Fred and Lamont to accept their offer and the deal is done. 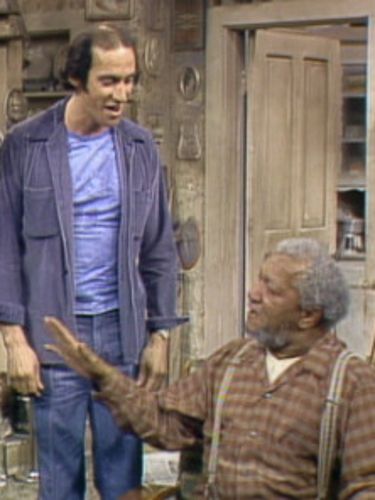 Greed begins to take hold.  Fred knows that he is in a position to take advantage of the fact that they need him to sign in order to make it happen.  He is going to hold out for the most money.  Julio and Lamont beg him not to mess up the deal.  All of his neighbors are counting on him.   As he leaves, he reminds Fred that the Japanese representative will be by “first thing in the morning.”  Fred responds, “I know.  They always attack at dawn.”

The following morning, Julio returns wondering if the Japanese realtors have been by.  They have not.  Fred is stuffing fortunes he wrote in fortune cookies (“You’ll meet a tall, dark, handsome stranger.  Give him what he wants!”). Again, Julio begs Fred not to blow it for everyone.  He reminds him that as soon as he signs, they all get their money.  “Mr. Sanford, we are all in the boat!”  Fred’s reply cracks me up – “This is your captain speaking.  Get your poop off my deck!”

The realtor is not at all what Fred expected, in that she is a young and pretty Japanese lady who introduces herself as Miss Funai.  She explains that they have appraised the house and factored in extra money for “sentimental value” and offer them $20,000.  Upon hearing the price, Lamont becomes frantically excited and rushes to get a pen (a very funny moment, as he continues to try to keep a calm voice).  Fred, of course, plays up the whole “sentimental value” aspect and fakes some tears.  She explains that she will leave, discuss this with her partners and return later.  As she leaves, she says “Sayonara” to which Fred replies, “Frank Sinatra to you, too!”

Lamont is upset, but Fred explains that since they are t he last to sign, he knows they will be back with an offer for  more money. When she returns, the offer has indeed increased – by $2500.  Fred refuses and she asks if she can use their phone to call her partners.  While in the kitchen on the phone, Lamont rips into Fred saying he is going to blow the deal.  When Miss Funai returns, she explains that she cannot discuss any further, however, if they would come to dinner at her house, they can discuss with the other business partners.  Lamont says that they will be there.

Upon arriving at the home of the Funai’s, they are asked to remove their shoes and jackets, which makes Fred a bit uneasy.  In the next scene, the two emerge in Japanese robes.  Lamont notices a Samurai sword on the wall and asks about it.  Miss Funai says that he uncle used it to kill himself.  Fred says to Lamont, “What’s the big deal about killing yourself.  My Uncle Alfonzo killed himself in St. Louis and you don’t see me hanging wine bottles around the house!”

Miss Funai’s father and grandfather enter the room and they are asked to sit at the table.  The table is on the floor and there are no chairs, allowing some very funny physical comedy from Redd Foxx as he tries to (and eventually does) sit on the floor.  On the table is traditional Japanese food.  Miss Funai tells them what each dish is, and Fred passes.  He instead says he’ll eat “some of these grapes” which he describes as “a little slippery.”  Miss Funai applauds him for trying them and informs him that he is eating fish eyes! This brings about another magical moment of visual comedy as Fred spits out the fish eyes.  His face is priceless.

Fred is told by the father that the grandfather is impressed by their sentimental attachment to their home.  Because of that they are offered a “top price” of $27,000.  He immediately asks for $30,000 as a “tip top” price, to which Lamont tells him he is going to take this deal and sign the paperwork.  Fred is handed a pen, which he cannot hold onto because of “his arthritis” which he says may have happened as he tried to sit on the floor.  The father asks if he has a bad back.  Fred says he does, and the father instructs a family member to get acupuncture needles to help him.

Upon seeing the needles, Fred jumps to his feet and claims they are going to torture him.  This is my favorite scene in the show.  He yells, “Stand back!  I know kung fu!  I never miss a show!”  Fred begins to move his arms and body around doing some hilarious kung fu like moves before running out of the house.

The Sanfords return home and Lamont is sure that the deal is off.  Fred has obviously offended their Japanese hosts.  Fred insists that they need their house, so they will be back.  He has his eyes set on much more money.  Sure enough, there is a knock on the door and it is Miss Funai and her grandfather.

The grandfather speaks Japanese to him and Miss Funai translates.  She says, “Never is his life had he met a man as great as you.  He respects your great love for your home.  He wouldn’t dare ask you to leave it.”  Lamont reacts and rolls his eyes.  Now Fred starts to insist that they buy his house.  “Ask me!” he says.  She says that her grandfather wouldn’t think of uprooting them.  “Uproot me!” Fred yells. 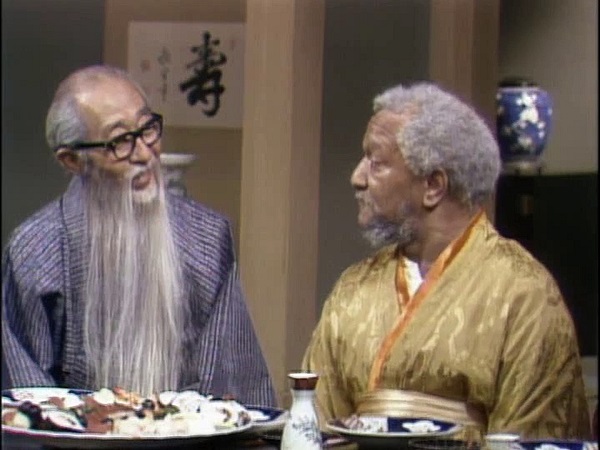 Before leaving, Miss Funai hands Fred a gift.  She says, “As a gesture of respect and friendship we offer you this sea shell” and they walk out the door.  Fred continues to try to get them to reconsider as they leave.  As the door shuts, Fred stands next to Lamont and looks down at the sea shell.  Fred asks, “What am I gonna do with this?” Lamont’s reply is priceless.  In a calm voice he says, “It’s a sea shell, Pop.  Hold it up to your right ear (which Fred does), and (angrily) push it through to your left!”

In the final scene, Lamont comes in and asks if the neighbors have called to yell at Fred yet.  He says they haven’t.  Lamont says he thought they’d have been all over him for messing up the entire real estate deal.  He goes upstairs and we find out why the neighbors haven’t gotten angry – Fred is calling them, disguising his voice saying they aren’t going to buy the properties.  His call to Julio ends the show in standard Sanford fashion.

Sanford and Son has so many great episodes.  My dad, my grandparents, and I would often spout out quotes from our favorite episodes.  Thanks to Terence from A Shroud of Thoughts for allowing me to participate again this year!  I am already looking forward to next year.  There are so many great shows to chose from, but then again, there are still plenty of Sanford and Son episodes to chose from … 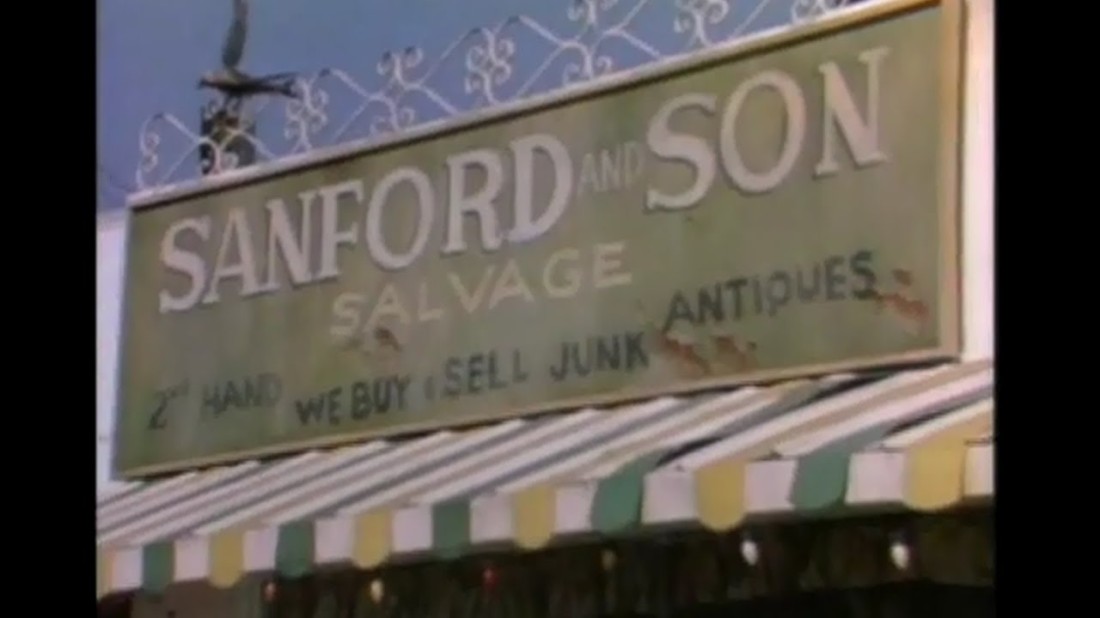