My friend Margaret posted this picture on my Facebook page today saying that it “reminds me of visiting grandma’s pantry!”:

I totally laughed out loud at this picture!  The dude has a shopping cart!!!  I can totally relate to this!  My grandma’s pantry was literally a grocery store! Perhaps this is because she lived through the depression.  I really don’t know, but she was always bargain shopping.  I remember my dad taking her to three different grocery stores on the same day because of the different sales going on!  Coffee is on sale at Farmer Jack ….. 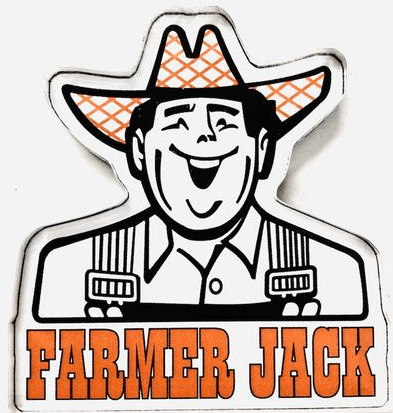 They have a sale on paper towel at Kroger ….

We rarely went into my grandma’s basement.  I don’t really recall why.  Perhaps that’s why I can only recall certain things about it.  I remember there being an extra stove down there, which she used for baking Christmas cookies.  I remember the washer and dryer and laundry area.  There was a huge freezer where she stored Wonder Bread, and meat.  I also remember a small area with peg board where my grandpa had some tools.  The one thing that I can remember vividly, is the pantry!

The pantry was directly under the stairs.  I think there was a sheet or a curtain that was used for a “door”.  In the middle of the pantry was a string that hung down from a light fixture that you pulled to turn on the light.  Once you turned on the light, you could see countless shelves, stocked fully of everything and anything! 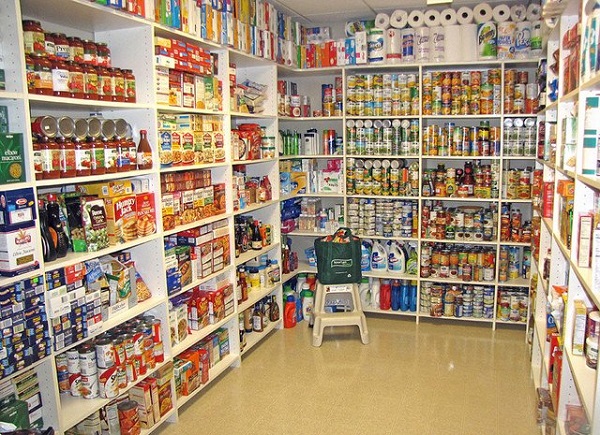 It was insane!  It was SO full, we used to call it “Kroger”! The above picture would be a fairly accurate comparison to my grandma’s pantry, except it was hardly as wide!  Looking at this picture made me chuckle, because as I look at it, I see many similar items that grandma had.  I see the countless boxes of noodles (which my grandma ALWAYS had).  I remember her having Prince noodles.

There was a Prince facility close to our house (off of Groesbeck Highway, I think) which had a sign, which was a HUGE box of noodles.  On the back of it was their slogan “Wednesday is Prince Spaghetti Day!”

One thing that I see in the pantry pic that would NEVER be in grandma’s pantry is jarred spaghetti sauce!  As I have said in previous blogs, grandma made her sauce from scratch every Sunday!  So instead of the jars, there would be can after can of Contadina Sauce, Paste, and Puree.

I remember there being hundreds of cans of Contadina!  Cans of all sizes lined the shelves of the pantry!!

I made more frequent visits to the pantry when I had moved to Ludington when I was 21.  I would come home every other weekend and see my folks, my girlfriend at the time, and my grandparents.  I always left with a box of stuff to take home.  She made sure I always had things I wouldn’t necessarily think about.  Things like dish soap.

Always looking for the bargain, my grandma probably had the cheapest dish soap ever made!  It was this pink generic brand that hardly made a bubble when you washed with it!  The pantry was full of this!  It was so cheap that I think I used an entire bottle every two weeks!  I can’t describe the smell of it, but I’d know it immediately if I caught a whiff of it today!!

Another thing she always sent with me was bath soap – Lux to be exact.

I think my entire family razzed her about this soap!  She didn’t care.  She was an advertiser’s dream client!  When I asked her why she bought so much, she told me “Movie stars use that!!”  She obviously had heard commercials and seen print ads featuring Loretta Young, Jean Simmons, and Natalie Wood!!

As far as I know, there were no Lux ads with men promoting it!

Another shelf was loaded up with Ketchup.  I’m sorry, Catsup.  I remember grandma using Del Monte for most of my childhood, but at some point, switched to Hunts or Heinz. 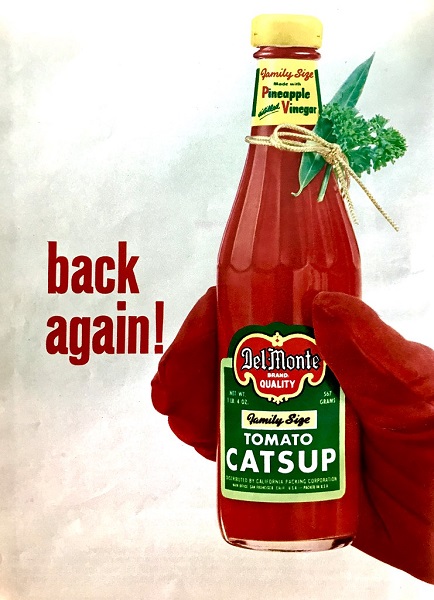 Just what is the difference between Ketchup and Catsup anyway?!  We must have used a different brand at home, because I remember the ketchup at grandma’s house tasted different.  Maybe because (according to the picture above) Del Monte used PINEAPPLE to make it?!?

Another thing that was always in grandma’s pantry was Velvet peanut butter! It had three faces on the front and they all had names (kind of like Rice Krispies Snap, Crackle and Pop) Fresh, Pure, and Delicious.

I remember grandma making peanut butter and jelly sandwiches with crunchy Velvet and apple or strawberry jelly.  She always saved the glass jars that the peanut butter came in.  They became storage for things like screws and bolts for my grandpa, as he had them lining his workbench under the pegboard.

The other things I remember from the pantry were not kept on a shelf.  There was a little area off of the door where grandma kept her storage containers.  These would be the various containers that would eventually hold the numerous cookies that she would send home with us every year.

My favorite was always the Better Made Potato Chip Can.  She would place a layer of different cookies in it starting at the bottom.  One layer would be ice box cookies, next would be sugar cookies, next were sesame seed cookies, followed by oatmeal raisin and chocolate chip.  It seemed like a million cookies in that can, although it probably only held a little over 100. 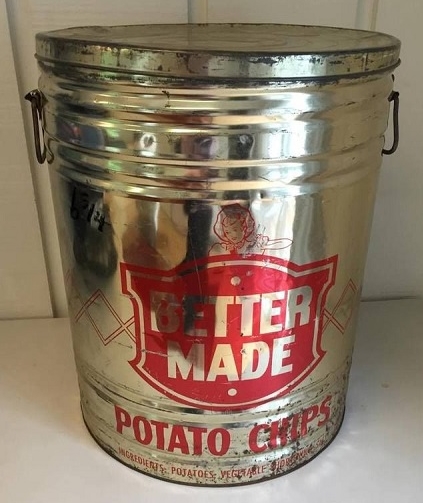 It’s truly amazing how something like a picture can bring back something you had totally forgotten about!  Thank you, Margaret, for the laugh and for allowing me to revisit grandma’s pantry, I mean, Kroger!  Until my next visit …. let me just turn off the light ….

One thought on “The Always Fully Stocked Pantry”