It’s April Fool’s Day. In honor of this, I thought I would share a funny story in which I was the victim of a funny prank. It’s funny now, but at the time, I didn’t find it funny at all. My memory is a bit fuzzy on some of the details, but I am sure my friends will be more than happy to fill in details or correct me if I mess up details.

One of the highlights of my senior year of high school was going out toilet papering. We’d go to the store, buy 12-24 rolls of toilet paper and go out and hit some friend’s house. I don’t know how or why this became the “thing” to do, but we did it. If it was your birthday, you could almost count on your house being hit. 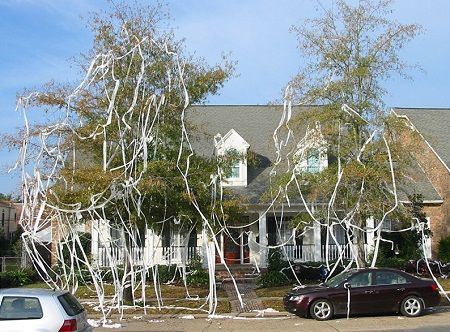 There were groups that went out together: 1) The Cheerleaders, 2) The Jocks, 3) The Choir Kids, and 4) The Band Kids (and there were sometimes groups within the groups). We belonged to a sub-group of Band kids. We called our group The TP Bandits. There was never a doubt that we were the ones who hit your house. We had printed up (on a crappy dot matrix printer) signs that read “You have just been TP’d by the TP Bandits.” There was a cheesy and terrible graphic of two cowboys on it. We usually left it in the mailbox. I got a megaphone for Christmas one year, and it was not odd for us to yell something like “Love ya, Babes!” to whoever’s house we hit.

I am sure that Toilet Paper stocks went up that year. It was completely out of control! My dad would always wake up the next morning and come in to wake me up by saying something like, “So, your friends were here again last night. Looks like you’ve got some cleaning up to do!” Because we went out a lot, I got TP’d a lot. It was like that scene in The Godfather where Sonny is explaining how “they killed Luca, so we hit them back and killed ….” If you went out and TP’d – you could expect to get it back.

It wasn’t just houses, either. There were plenty of times where we TP’d cars. Many times, we’d do it when the friend was at work. My friend Diana always reminds me of the time we got her car while she was working at Frank’s Nursery. She’ll have to remind me, but I think she had left her car unlocked and I think we TP’d INSIDE it! I am almost positive I remember TPing around her rearview mirror.

As best as I can remember, we went to one of the colleges (I think it was CMU) to watch a football game. It was an optional trip and the whole reason we went was so we could watch the band’s half-time show. I don’t remember if it was something that you had to pay to go to, but that was probably the case. Because of that, I remember that not all of my friends were going on the trip. I would soon learn why.

I remember the buses turning into the parking lot at the high school (and here is where my friends may need to refresh my memory) and noticing something on my car. My memory is not clear here, but as I remember it, there were empty toilet paper rolls on my radio antenna (I do not think they had TP’d the car). It was at that moment that I knew that I was in for it when I got home.

I am not 100% positive on this, but I think my friend Joe was the mastermind of the whole thing. I remember getting in the car and heading home. As I turned onto my street, I could see the streams of TP waving from the tree in front of my house. The closer I got, the more I realized that it was MUCH more than that! The lawn was white – like it had been covered with a layer of snow. Branches were wrapped completely and so was the tree trunk. The front yard and back yard had been covered in toilet paper. 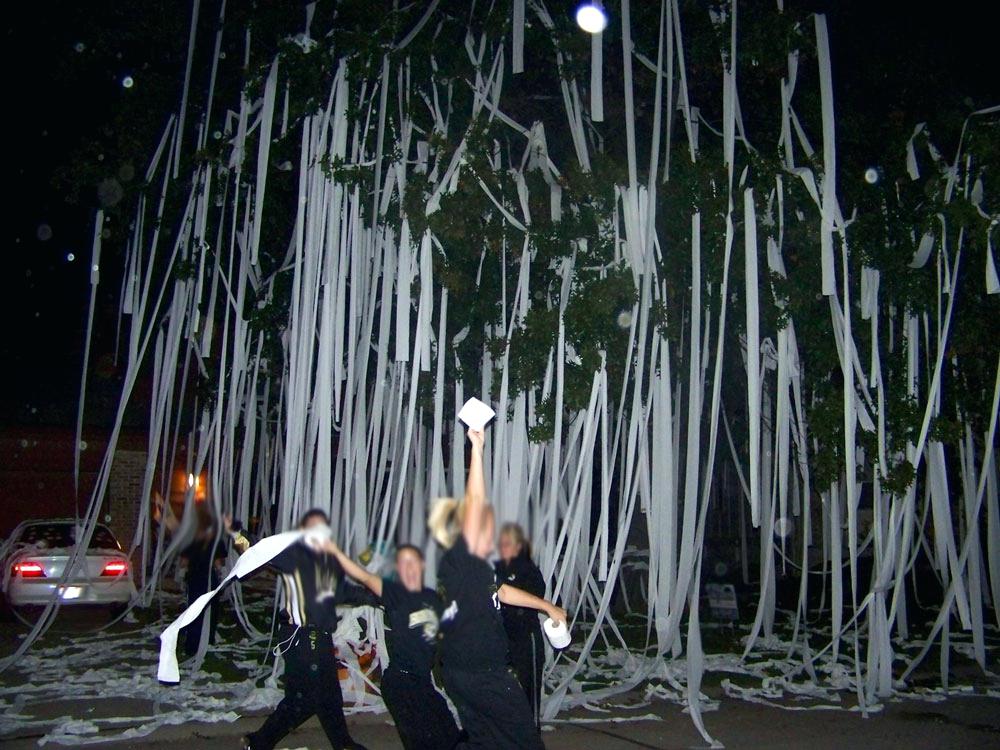 As I drove by, there were friends sitting up on the roof awaiting my arrival. They were waving and smiling and I was furious! I called my mom from an ancient Nokia cell phone and she answered with a smile, “Hi, baby. Where are you?! You have guests here!” I remember asking if they had gone into my bedroom and she told me I’d have to come home to find out. I had lots of memorabilia in there and I was worried that something might get broke. I couldn’t believe that she had let them in my room.

Joe had asked my mother if they could come over while I was away to “decorate”. My mom must have thought this was a hilarious idea, because she let it happen. I am guessing if he had asked my dad, he would have told him to get lost along with some words of profanity. I am sure my mom probably helped string some toilet paper around, too that day!

When I finally got up the courage to return home, my friends were still up on the roof. There was one of those contruction barriers with the flashing light on it. They had painted it all white and in big black letters painted “Love Ya, Babes!” I am sure that Derek was solely responsible for that!

I got out of my car and looked around as I walked into the house. I gotta tell you, it was a masterpiece! I was impressed at their work. It was beautiful. It was the kind of TP job you wish you had time to do! Word is that the police stopped at the house more than one time and my mom was right out there to tell them it was totally fine with her! I can only imagine the talk back at the police station that day.

The “piece de resistance” of the job was what they did to my bedroom. As I turned the corner to go into my room, I looked into my doorway and saw nothing but newpapers! There was literally a pile of newspaper coming out the door! They had blown up hundreds of balloons, laid those down first, and then crumbled up newspapers and put them in the room to make it look like they had filled the room floor to ceiling with newspapers!

As angry as I was at my mom for letting it happen, I smile about it now. That was the way she was. She knew that I had done more than my fair share of TPing around the city, and this was the ultimate payback! I am sure she was filled with excitement at the thought of having a bunch of the gang over to do it and probably laughed the entire time. That’s one of the reasons so many people loved her – she loved a good joke and this certainly was one!

I came to find out that more people were in on the joke than I thought. Even kids who were on the trip were aware that it was happening while we were there! I was the brunt of many jokes that following school day! I was red-faced, but not because of sunburn. I carried the embarrassment with me throughout the day. It seemed like every one, even those who weren’t in band, knew of the prank and were talking about how cool my mom was for letting it happen!

FYI – these pictures are NOT of the job they did. I’m sure someone has some, but I sadly, do not.