115 years ago today, Jerome “Curly” Howard was born. He was a man who made – and continues to make – millions of people laugh! He is considered by many, myself included, to be a comedic genius. He, of course, is remembered for his role as the “third stooge” in the Three Stooges comedy team. He is easily remembered as the most popular, and favorite stooge.

His brother Moe was the leader and often delivered slaps and konks on the head with various instruments. Larry was the stooge in the middle and often overshadowed by the other two. Curly was a whirlwind! He was a ball of energy. He was a childlike force of physical comedy! He commands every scene he is in! Whether he is a “victim of coicumstances”, barking like a dog, “woo woo wooing”, or giving his standard “N’yuk, n’yuk, n’yuking”, he has rightfully earned a place in comedy history.

In honor of his birthday, here are my “Must Watch” Curly shorts:

(1934) Punch Drunks – Curly is KO Stradivarius, a boxer who goes nuts when he hears “Pop Goes the Weasel”

(1934) Men in Black – The Stooges are doctors in their only film to be nominated for an Academy Award (for Best Short Subject – Comedy). “Calling Doctor Howard, Doctor Fine, Doctor Howard!”

(1935) Pop Goes the Easel – The boys are mistaken for art students. No pie fight, but there is a clay fight!

(1935) Uncivil Warriors – The boys are undercover agents during the Civil War. Curly in drag as Mrs. Dodge is priceless.

(1935) Pardon My Scotch – The boys are mistaken for three Scotsmen who brew a mean batch of Scotch. Curly is Mr. McSnort.

(1935) Three Little Beers – Whether you golf or not, the boys ripping up a golf course is funny stuff!

(1936) Disorder in the Court – Probably one of the best known Curly shorts. Curly being sworn in before testifying is one of my favorite bits.

(1938) Tassels in the Air – Know your Pig Latin! Moe is mistaken for the famous interior decorator Omay. Curly goes nuts whenever he sees tassels.

(1938) Violent is the Word for Curly – Imagine the boys as college professors! Swinging the Alphabet!

(1940) A Plumbing We Will Go – The Stooges are plumbers. Curly surrounds himself in pipes! Dudley Dickerson’s appearance in this short is brilliant!

(1940) No Census, No Feeling – while taking census, they wind up in a bridge game. “Are you married or happy?”

(1940) Boobs in Arms – The boys wind up in the army and drive their drill sergeant nuts!

(1941) I’ll Never Heil Again – Moe’s impersonation of Hitler is spot on. Many say that Hitler had the Stooges on his “hit list” because of this short.

(1941) An Ache in Every Stake – The Stooges are ice delivery men. Curly climbs a very famous set of stair to make a delivery in this short.

(1943) Dizzy Pilots – The Stooges have invented the Buzzard, an airplane that will revolutionize flying. Their test flight better be good, or its off to the army.

(1944) Gents Without Cents – If for nothing else – watch it for the Niagra Falls bit!

(1945) Idiots Deluxe – Two scenes I love from this: The Original Two Man Quartet and a bear driving off in the Stooges car.

(1945) If a Body Meets a Body – Curly is in failing health by this time, but the scene where they make him jump backwards still cracks me up.

(1945) Micro-Phonies – probably the best of Curly’s last films. He is mistaken for Seniorita Cookaracha and is asked to perform at a party. Lip-synching at its best!

(1946) Three Little Pirates – even though Curly is ill – he is still able to pull of the famous “Maharaja” routine.

(1947) Hold That Lion – The last on screen appearance from Curly. It is a cameo in a Stooges short that features Shemp as the third stooge. Curly appears as a passenger on a train and his hair is grown out. It marks the only time the three Howard Brothers (Moe, Curly and Shemp) appeared on film together.

I am sure there are plenty that I missed, but off the top of my head, these are some of my favorites!

My friend Eddie Deezen (who you know as Eugene from Grease) wrote two articles about Curly that are worth reading:

Here is his excellent article on Curly’s final years:

Happy Birthday, Curly! Thanks for the laughter! 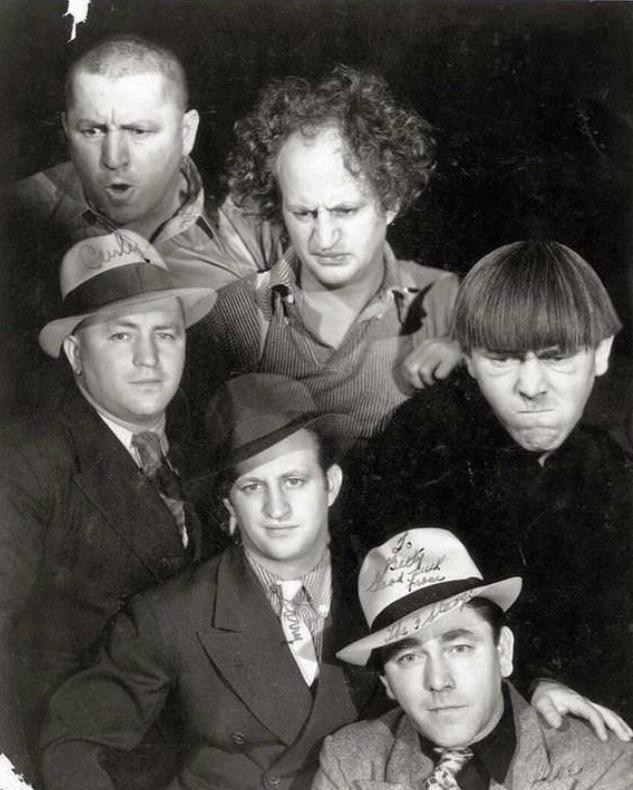