My love of music should be very apparent to those who read this blog.  I have written about some of my school band experiences, about some of my favorite musical artists, posted songs that hold special memories for me, and about my career playing music on the radio.  One thing I haven’t written about is my first musical instrument and the wonderful teacher who taught me.

When my boys were in elementary school, they each bought a recorder and in their music class, they learned to play it. I don’t recall ever buying one, but I remember in 5th grade, before we all got the opportunity to try an instrument, we all played a recorder.  We played Mary Had a Little Lamb, Hot Cross Buns, and other simple songs.  Eventually, we got to try out to be in band and I wound up playing the trumpet.  This, however, was not my first instrument.

When I was a kid, there was a store in Macomb Mall called “Grinnell’s Music” 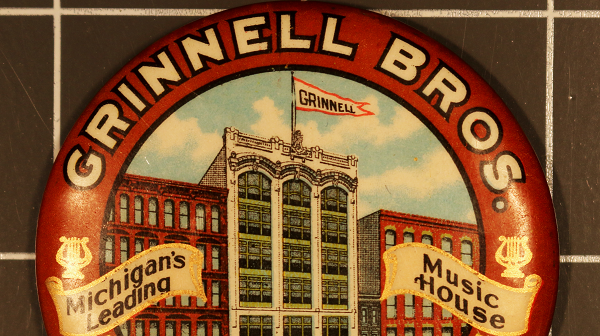 Grinnell’s was founded in 1879 in Ann Arbor, Michigan.  Their headquarters was eventually located on Woodward Ave. in Detroit.  At their peak, they had about 40 stores.  They sold pianos and organs.

(Interesting note:  The Titanic was a ship on the White Star Line!)

I wasn’t sure, but I thought they sold band instruments, as well.  The following ad, confirmed my memory. 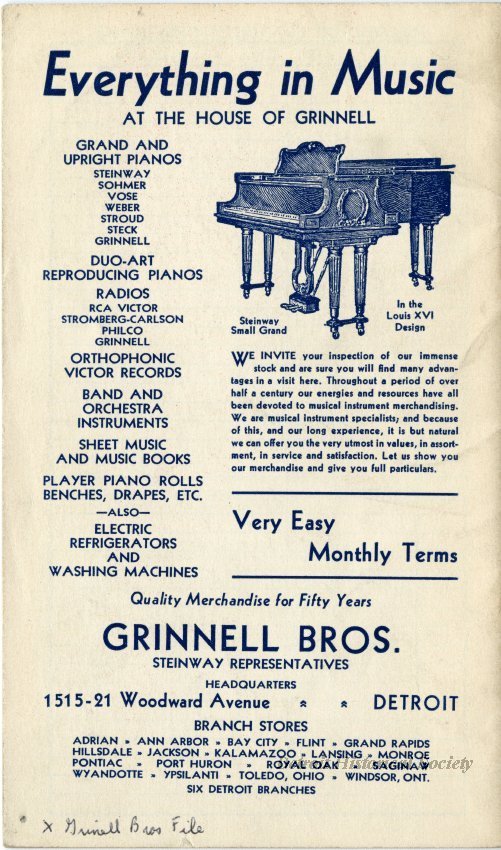 I had to laugh because I really don’t remember seeing appliances like refrigerators and washers in there!

I probably should have got some clarification from my dad on this before I blogged, but I can’t recall if I asked to play a musical instrument or if they decided to have me take lessons.  I am sure he’ll let me know if he remembers.  At any rate, I remember going in to Grinnell’s and being signed up for lessons.  My mom took them, too.

I am unclear on the date I took lessons, but I can narrow it down to somewhere between 1976-1980.  Again, my memory is fuzzy on this.  I remember starting when we lived in Sterling Heights, so that had to be 1976 (we moved to Warren in winter 76-77).  I also remember it being before I started playing trumpet, which would have been in 5th grade – 1980.

The organ we had was this huge Hammond, as I remember.  I tried to find a picture of it at the house, but couldn’t really find a good one.  It looked something like this:

The white square above the top row of keys were for rhythms to accompany you.  It was basically a drum machine.  You could hit “Big Band/Swing” and it was this jazzy drum and cymbal lick.  There were other “styles” as well.  Here is an older model and you can see the different styles. 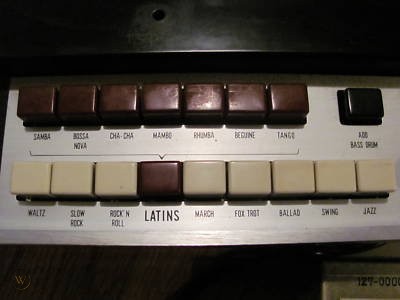 The red, yellow, blue, and white “toggles” to the left on that organ picture were “Voice Tabs”.  When you pushed down one of these, you could make the sounds of a trumpet, cello, strings, and the tibia (a word which still makes my friend Johnny Molson and I think of Jerry Lewis in the Nutty Professor).

The first few months of lessons were basically teaching me which fingers to use on which keys.  There were scales, and practice pieces that I had to learn. Eventually, we added songs to the practice material.  Naturally, we learned Mary Had a Little Lamb and Hot Cross Buns!  I remember playing Chopsticks, and a few other easy songs.  I remember playing Christmas songs and Amazing Grace, too.  The one I remember the most was “Believe Me, If All Those Endearing Young Charms”.  You may not know the song by name, but if you grew up with Bugs Bunny, you’ll remember it as the song that he keeps playing the wrong note on.

It’s one of the few songs I can still play on the piano/organ.

Mrs. Bostick was always such a nice lady.  We became fast friends.  We made each other laugh.  She always told me how special I was.  She always told me I had a great smile and told me that I was a natural musician.  Most of the lessons were done at the Grinnell’s store.  I do, however, remember her coming to the house for lessons as well.  I remember she used to pray with me after the lesson was over and then ask for a hug.

I remember how sad I was when she told me that she was moving away.  Her husband was a pastor, and I am not sure, but I think he had taken a job at a church in Sacramento, California.  We wrote each other often for years after she moved.  She always sent a Christmas Card.  She wrote to me and my mother.  Mom wasn’t always good about writing back, when her dad (my grandpa) passed away in 1981, mom had severe depression.  The last thing she wanted to do was write letters.

As the years went on, Mrs. Bostick continued to write to me.  She loved that I was in band and playing trumpet.  She always told me to practice my scales!  She sent me such a nice letter when I graduated high school.  Sadly, that was misplaced in a move.  She offered many words of encouragement to me as we dealt with my mom’s breast cancer.  She always put my mom on the prayer list at church.

I remember how sad I was when she started typing her letters, because her hands hurt so bad.  Because of that, she could no longer teach music, and this made her very upset.  She always wrote and told me about her sons and daughters.  She came to visit them in Michigan every so often.  The last time she and her husband were here, it must have been about 2003.  I remember they were staying at an Extended Stay Hotel and I visited them there and had my oldest son (who was still a baby) with me. That was the last time I saw her.

One of her last letters to me informed me of her husband’s passing.  It was one month before my mom passed away.  When mom passed away, I called Mrs. Bostick to tell her. She was so surprised to hear from me.  She told me about how her husband passed away, and then I told her about mom.  We cried together.  She told me how much she loved my mom and me.  She said she could not believe that big voice was coming from her favorite student!  Before we hung up, she turned the tables on me.  Normally, she would be the one to pray, but this time she asked me to.  That was one of the hardest prayers I ever prayed.  Before she hung up, she thanked me for calling, told me she loved me and to keep in touch.

Letters continued sporadically, but due to changes of address for me and her, I lost touch with her.  Almost a decade later, I did and internet search for her and came up with nothing.  When I searched for her husband, I saw that he had an obituary on Find A Grave’s website.  It was there that I saw that she had passed away, too.  I wish I had some sort of contact info for her children, as I would love to reach out to them.  I tried to search for them on Facebook, with no luck.

She was a very special lady.  She made learning music fun for me.  She got such great joy teaching me how to play.  I really wanted to be in band because of her.  She told me that making music always made people smile.  I know that to be true.  I also know that making music made ME smile.  It’s one of those things I wish I could still do, but my schedule doesn’t allow me to.

Today, many keyboards are light and portable.  Many of them are so advanced that they  will play entire songs for you at the touch of a button.  Back when I was a kid, however, I learned to play music on what was literally a huge piece of furniture and was taught by one of my dearest friends! 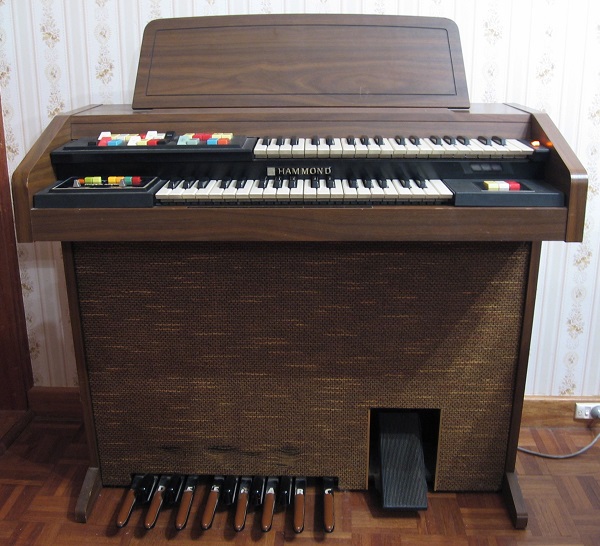 Somewhere at home I have a Polaroid of Mrs. Bostick and her husband.  She sent it to me in a Christmas card years ago. Sadly, I have no pictures of us together.  I am almost positive that she had her husband take one of us together when they were last in Michigan.  I wish I had asked for a copy of it.