Outside of a wedding ring, I don’t know many men who wear a lot of jewelry (unless they are a rapper!).  I know a few guys who wear a chain around their neck or maybe a bracelet.  I don’t wear much jewelry, and up until a year or so ago, I only wore a ring.  Due to money issues in my first marriage, I ended up pawning a few gold charms I had, and eventually my wedding ring.  If I hadn’t put my foot down, I may have been forced to pawn a very special piece of jewelry.

In a recent blog, I posted a picture of my daughter on my chest.  In that picture, you can see a bit of a necklace that I began wearing again within the past few years.  This is the brief story of this golden gift that means quite a bit to me.

My grandmother had given me a chain with a cross on it when I was probably about 13 years old.  The chain ended up breaking because it was so thin, and she gave me another one.  One Christmas I had asked my parents for a trumpet charm to wear on that chain.  I wish I could remember the year, but that escapes me.  It may have been shortly after my grandpa died in 1981, but I’m not sure.

At any rate, I remember it being the last gift my mom handed me to open that year.  It was such a simple charm, but I loved it.  She told me she had it specially made for me.  She knew some jeweler who had made a ring or something for her and they did it.  I wore it all the time – until a few years after I got married. 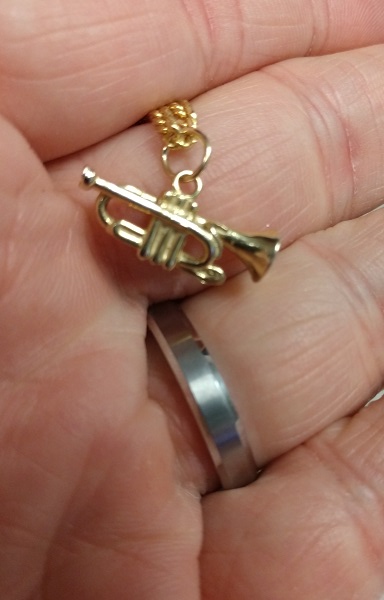 At some point during that relationship, I was told how silly it was to wear the necklace.  “You’re not even in band anymore.  That horn sits in the case collecting dust.  You look silly wearing that thing,” I was told.  So I took it off and it sat in my jewelry box for years.

Fast forward to a few years ago.  I was moving some stuff around at the house and my jewelry box fell and the stuff in it fell out.  As I picked up things like my class ring, my tie clips, tuxedo studs, I picked up my necklace.  I immediately thought of my mom and just how happy she was to give that charm to me.  So I put it on.  Sam said she’d never seen me wear it before and I told her why I stopped wearing it.  She told me she liked it and told me I should wear it anytime I wanted.  I haven’t taken it off since. I have actually had patients ask about it while I am working.  My nieces always ask about it (and try to play it) when I am holding them.  I am sure Ella will do the same when she gets bigger.  She will even occasionally grasp onto the chain when I am holding her today.

The only other piece of jewelry I would ever consider wearing is a pinky ring – after all, I am Italian.  Dean Martin and Frank Sinatra both wore matching pinky rings that Frank had made for them, a gesture that showed their love for each other.  I think it’d be cool to wear one.

The chain and charm are one of two pieces of jewelry I wear every day.  The other is my wedding ring.  Each piece is a reminder of very special women in my life.  One promise I can make – you will never see me walking around with this ridiculous amount of jewelry on! 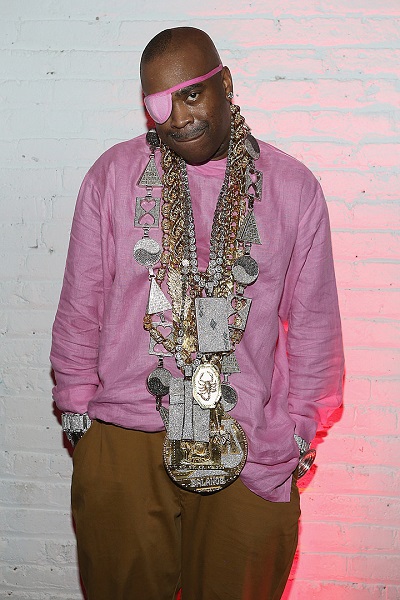 As a midnight shifter, I drink a lot of coffee.  I can thank my grandfather for my love of coffee.  He gave me my first cup (mostly cream and sugar) when I was about 11 or 12.  As I grew older, I began to just drink it black.  The only time I really drank it with cream and sugar was when I went to a restaurant (because the coffee pot often sat on the burner and it often tasted burnt). My first real radio job was working 1am-5am on air and then staying and helping the morning show.  I drank a lot of black coffee back then!

I could be wrong, but back then, I don’t really recall flavored coffee being a thing.  There may have been some creamers that were flavored like hazelnut and French vanilla, but that was it.  Mostly, though, if you used creamer – it was half and half.  I don’t even remember when I tried flavored coffee or even what flavor it was the first time I tried it.  What I do remember is that I wasn’t really sold on it.

I don’t think I would refer to myself as a coffee connoisseur in any means, but I do love it!  I can drink it almost any time.  I think, to a degree, I drink coffee to stay awake (when I work).  However, I also like to drink coffee for the taste of it.  To me, “a delicious cup of coffee” (as my friend Donnie P used to say) is the perfect companion to a good book or movie.

I don’t know how many years ago it was, but I was in the mall doing some early Christmas shopping.  That was when I first discovered The Coffee Beanery.  I remember walking in and seeing a board that listed the coffees that were brewed and ready to serve and one stuck out to me.  Cinnamon Holiday Blend.  I love cinnamon, so I thought I would taste it and see how it was.

I have to tell you – it was delicious!  I asked for a cup and went about my shopping, enjoying this cup of coffee the entire time.  It was so good that I had to go back and get another cup before leaving the mall.  I then found out that you could but bags of it there, so naturally, I had to do just that.

For years, whenever the kids asked what I wanted for Christmas, I had a simple answer for them – coffee.  It was the perfect gift!  It wasn’t a tie that would just hang in the closet and maybe get pulled out once a year.  It wasn’t some cheap gift bought at the secret Santa shop from school.  It was a gift that they knew I would use and enjoy!  It’s a given now – buy dad some coffee.

I try to buy an extra bag or two when I know that it is out, so I can make myself a pot every couple of weeks or at least once a month until it is once again available.  I have found that when you add Italian Sweet Cream creamer to it – it is even more delicious!

According to the Coffee Beanery website, the blend contains spices, almonds, and cinnamon.  Blended together, this is one amazing coffee.  One year I went to buy it and there was a woman there telling  the cashier that her holidays are not complete without this Cinnamon Holiday Blend.  I told her I felt the same way!  She said it is a highlight for her family at Christmas dinner.

I have yet to get out and grab a bag this year.  There was a bit of a delay in that the store, which was located in the mall, was in the process of moving to a new building across the street from the mall.  They are finally open and with the next paycheck, I may have to go up and grab a bag or two! 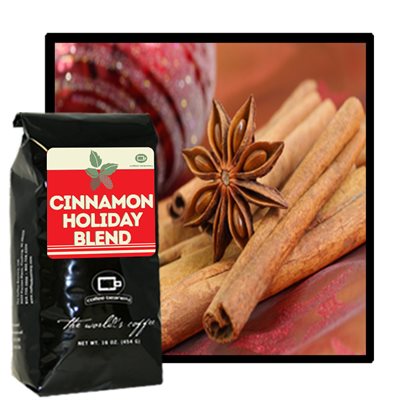 The Cinnamon Holiday Blend from Coffee Beanery is probably my favorite coffee of all time!  Don’t be fooled by the various “holiday coffees” served by other places like a co-worker of mine was!  She came in one night and said, “I bought that holiday coffee you were talking about.”   It was some expensive coffee from one of those other places and it tasted like strong burnt coffee with a pinch of someone’s dirty underwear!  URGH!!!

Coffee Beanery did not pay me to promote this coffee – this is a sincere and truthful blog about one of the things I absolutely look forward to each and every holiday season.  Stop in and try some – I think you will enjoy it!