Sometimes, all it takes is hearing things out loud for reality to set in. For example, I can probably raise your stress level by simply saying 7 little words: “Just ten more shopping days until Christmas!” Did you feel your blood pressure rise??

Christmas shopping has always been a headache for me, but usually because of money, but this year my wife has come up with a way to relieve that stress. I had heard this before, and I think it has circulated on social media in the past. The boys will each be getting four presents this year:

It is a polarizing idea for some, I know. Some feel that this will negatively affect kids who are “used to” getting a lot of presents. Then there are those who feel that this idea will actually help older kids understand life on a budget, and actually help them be thankful for the gifts that the do receive. As a parent on a budget, it helps to know we are not really going outside the budget we set aside for them. As far as stress, this is something that has proven to be very helpful as our shopping is done for them, and has been for a while!

At first, I wasn’t sure how they would take this, but in the end, I think it will be just fine. I say that because this is the first year that they didn’t have a long list of things on their Christmas list. As a matter of fact, when I asked them to start thinking about what they wanted for Christmas they answered with “I’m not really sure,” “I don’t know,” or “gift cards.”

We told them we had already picked picked up “what they need” and “something to wear” and told them they needed to work on the list of “what they want” and “something to read.” Simplifying this didn’t really help either. I literally dragged them to Barnes and Nobel to look for books and to a couple other places for what they wanted. I think I walked away with a few ideas, but nothing really substantial at the time. I have a few left over ideas that I need to pass along to my dad, who has to go shopping for them, too.

While the stress of shopping has been alleviated, now we are dealing with another stress. Remember at the beginning of the blog I mentioned how hearing something out loud can make something a whole lot more real? At Sam’s OB appointment this week we learned that baby is sitting head down – an indicator that she may be here before we know it (and possibly before her due date in February)!

Now, we are aware that with most first babies, they tend to be late rather than early. This statistic was made known to us this week at our birthing class, as well. While the due date is still 64 days away, we are faced with the stress of trying to finish sanding, cleaning, painting, and decorating her room before her arrival. I am feeling the pressure and the stress that goes with it!

This is my first time dealing with drywall – I had no idea just how dusty it gets! The dust from sanding is EVERYWHERE! I end up tracking the dust from room to room as I am working. It is just a mess that I feel will NEVER get clean!

64 days may seem like a long time, and it is, but I am still working my full time job, working both part time jobs, attending birthing classes, and squeezing in doctor and therapy appointments in there, too. The possibility of our daughter arriving ahead of schedule has my wife and I freaking out a bit, to say the least.

Once I am off the air, I am heading home to try to finish up the sanding and patching. I will probably need to go ask my neighbor for his shop vac to “attempt” to get most of the dust up – just in case I get the walls to the point where we may be able to start painting! I would LOVE to have everything done by Christmas … but I know that is NOT going to happen!!

I may need to add a stress management class to the mix of all the stuff I already have going on …. 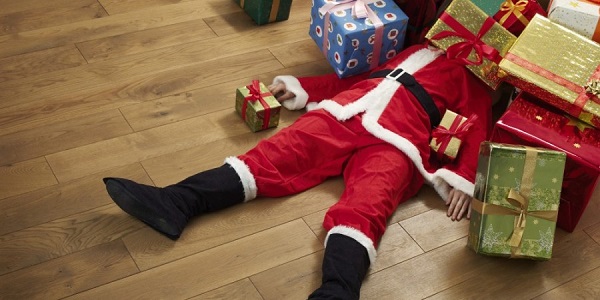 Halloween is barely behind us, and we are just a day or two into November.  Christmas is over 50 days away, however, it is everywhere! Even before Halloween, many stores had their Christmas displays and decorations up!

For years, people have pondered, discussed, and debated the “how early is too early for Christmas” topic.  In September this cartoon was all over the internet:

Just before Halloween, Sirius XM radio began adding their holiday channels to their line up.  Countless radio stations across the country flipped to “all Christmas” music yesterday and Facebook and almost every major news outlet had stories about it.  I really don’t know why people were acting so surprised by this, because it happens every year!  Is this the earliest stations have flipped?  No.  I recall a few years where some stations flipped to all Christmas BEFORE Halloween.

People inevitably ask me the question – “Why do stations go all Christmas so early?!”  The answer is a simple one – ratings!  Its not always the case, but most of the time, these stations who play all Christmas music do very well in the ratings books – which means more $$ for the station.  Some retail stores do not have the pre-recorded satellite music, so they will pipe the “all Christmas station” throughout the store.   That means more listeners to that particular station.

Is it good or bad?

So this brings me to a Facebook discussion some friends were having (after one person voiced his disgust at the fact that his station flipped to all Christmas) yesterday.  His argument was that “holiday music increases stress and is unhealthy for people.”  I knew exactly what he was referring to.

A couple years ago, a psychologist named Linda Blair said that listening to Christmas music too early in the holiday season can have a negative effect on people.  She stated that it can affect mental health triggering “feelings of stress.”  She said that hearing holiday music is a reminder of all the things that you have to do to get ready for the holiday.  She said the music will cause you to worry about (and become overwhelmed by) the things on your “to-do” list like travel planning, shopping, and planning for parties.

She also said that people who work in retail, especially those who work at places like shopping malls, face a higher risk of what she called “Christmas music-induced stress”! “Hearing the same songs over and over each day could make workers struggle to ‘tune it out’ and they become ‘unable to focus on anything else,’ she said. “You’re simply spending all of your energy trying not to hear what you’re hearing.” 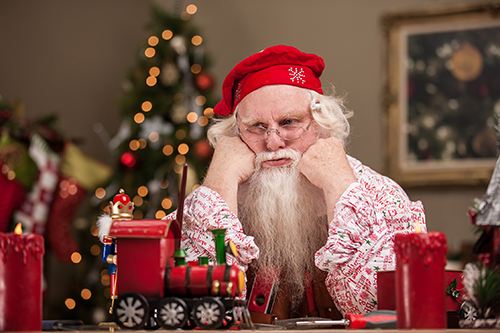 That story first hit the news in 2017, and has already be reprinted this year on many social media and news pages.  Blair never really cites any concrete evidence, or study results, so how do we know that this is actually the case?  Maybe she is just a Grinch who hates Christmas Music?? Who knows?!

On the other hand …

In response to Linda Blair’s findings, there is another article (this one citing “scientific studies”) that says the exact opposite!  In those studies, it was proven that listening to “uplifting music”  – like Jingle Bell Rock, Frosty the Snowman and A Holly Jolly Christmas, to name a few – has been known to have a positive effect both physically and psychologically.

“According to these studies, the feeling associated when listening to music can be sorted into two categories, perceived emotions (when we appreciate the emotional tone of the piece, but not feel that emotion ourselves) and felt emotions. Felt emotions are when we connect to the feeling behind the piece we are listening to and it can impact our emotional state.”

As someone who has worked in radio for 30+ years, I know first hand the connection that music has to memories.  Do a google search on “music memory quotes” and there are plenty of them. One quote in particular holds true for the next point – from Michigan’s own, Stevie Wonder:

“Music has a strong tie to nostalgia.”

This is why hearing a song from your childhood may bring back memories of elementary school, a high school dance, or a major life event like it was yesterday. It’s also why listening to certain Christmas songs can make people feel warm, fuzzy and child-like. Part of the reason why Christmas music is associated with joy is not necessarily the music itself, but the memories that come with it.

So, listening to Christmas songs may make you feel nostalgic for your childhood or just generally happy, because your brain has already created positive associations with the music. And it’s been proven – research conducted by researchers at McGill University proved that when people listen to happy, upbeat music, they can recall happy memories within a short amount of time.   The entire article can be found here:

“In the experiment, the researchers had participants listen to four different genres of original music they had never heard before: happy (positive, high arousal), peaceful (positive, low arousal), scary (negative, high arousal) and sad (negative, low arousal). The researchers found that when the participants listened to happy, upbeat music, it brought about happy memories.”

That being said, there are Christmas songs that can bring about sad memories, too.  So I guess there is that possibility, too.  For the most part, though, Christmas music is happy and upbeat.  That would suggest that listening to Christmas music brings about nostalgic thoughts which brings about happy memories and you being a happier person.

What’s my take on it?

While I don’t listen to Christmas music 24/7/365, I do have Christmas songs on my iPod.  When I am listening to it and a Christmas song comes on out of season, it depends on my mood as to whether or not I am going to listen to it.  There are some Christmas songs that I can listen to no matter what the season, because (as the latter study suggested) it makes me feel good or happy. 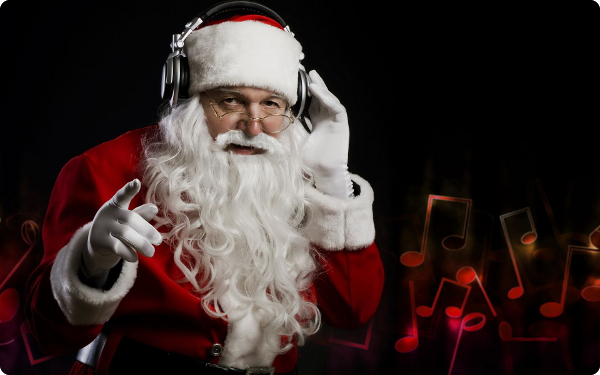 I remember when I worked at Honey Radio in Detroit, we would throw in “summer songs” when it was summer time.  We’d play “Those Lazy, Hazy, Crazy Days of Summmer”, “Wonderful Summer”, “Summertime”, and others and then cut back on them in the fall and winter.  I have never understood why songs like “Let it Snow”, “Winter Wonderland”, or “Jingle Bells” (which are basically winter time songs that never really mention Christmas) didn’t play throughout the Winter.

There are people who complain just because they like complaining.  Bottom line is this – radio is free.  You have many choices up and down the dial.  There are many other stations that are not playing Christmas music 24/7, so if you don’t want to hear it – DON’T!  Pop in a CD, listen to your Spotify, plug in a USB with your tunes on it, or find the satellite channel that plays the format you enjoy.  Problem solved!

I have always looked forward to the Christmas season.  People tend to be friendlier.  People seem to be kinder.  There is a sense of happiness that comes with the season.  Elvis Presely’s “Why Can’t Everyday Be Like Christmas?” captures that sentiment.  Just because you don’t want to listen to Christmas music, doesn’t mean that others don’t want to.  Christmas music and the holiday season bring about a joy that seems to be lacking today – don’t be a Scrooge!